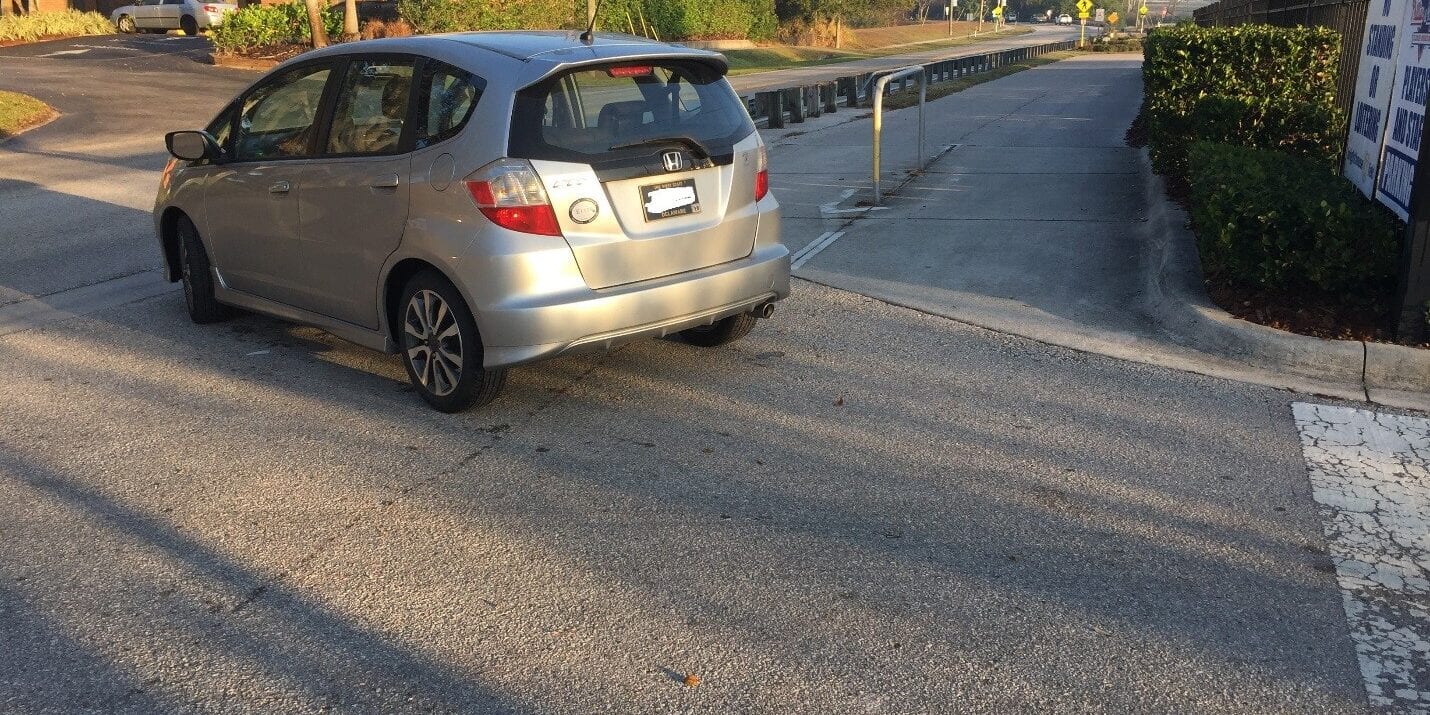 It was probably not how Andy Holcombe wanted to start his first day of an internship with the Philadelphia Phillies. Nor was it my intent to spend part of the morning commute flying over my handlebars and a vehicle’s hood to slam hard into the pavement, but there we were. Although this was just a minor crash between a car and bike involving some blood, bruises and a traffic citation, there is an important lesson here about safer street design for vulnerable users getting around Pinellas County and Tampa Bay on two wheels or two feet. 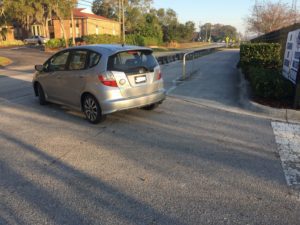 The crash scene at the Duke Energy Trail and Old Coachman Road.

Here is a Google Streetview image of the crash location. The Duke Energy Trail hugs the eastern edge of Old Coachman Road between the Ream Wilson Trail to the north and Drew Street to the south. The gated entrance into the Phillies’ spring training baseball complex with signage and landscaping creates sight visibility issues. Confused and trying to find where to report for his new job and unfamiliar with Clearwater, Andy could not see oncoming traffic from his position at the stop sign behind the stop bar, so he pulled his Honda Fit out to see if the road was clear of northbound cars. From my perspective traveling at about 10 mph, the fence and landscaping hid Andy’s car until it emerged right in front of me on the trail. I flipped over the car’s hood, landing hard on the pavement.

Despite some nasty road rash and bruising, I’ll be OK.  My helmet surely helped. Police and paramedics quickly arrived, and I was treated for cuts and released without going to the hospital. My bicycle was OK for the remaining ride into work. Clearwater police issued him a citation for failing to yield the right-of-way, but we all recognized that design problems contributed to this crash.

The Duke Energy Trail is a partially complete, 12-foot-wide shared use path that will connect with the Fred Marquis Pinellas Trail, forming a 75 mile loop around Pinellas County. It is a popular route that links parks, ballfields, neighborhoods and businesses with St. Petersburg College. Shared use paths like the Duke Energy Trail and Pinellas Trail are great facilities for bicyclists, but they can lull riders into a false sense of security at conflict points such as intersections and driveways. Similarly, motorists are not conditioned to watch for trail users.

Old Coachman Road and the Duke Trail are far removed from the worst cycling and walking locations in Pinellas County, but they are part of a network many different people traverse each day at their peril. There were nearly 500 bicycle crashes in Pinellas County in 2015, and while the Tampa Bay region of Tampa-St. Petersburg-Clearwater recently improved from second most dangerous for walking and bicycling in the country to seventh according to Smart Growth America, it remains a place in which far too many pedestrians, cyclists and motorcyclists die or become injured. That’s a big reason why Forward Pinellas and the Hillsborough County MPO are working with law enforcement, transportation agencies and community-based organizations on a Vision Zero approach to improve the physical conditions for cycling and walking, provide education to motorists, cyclists and pedestrians, and enforce existing laws that are meant to ensure safety. The goal of Vision Zero is to eliminate crash fatalities and reduce injury, but it will take time, money and new thinking to overcome a landscape built over the last 50 years.

A potential design solution at this location can be a first step to reach that goal. Conflict points like this driveway trail crossing should be more visible to provide extra safety. Stripe the trail’s path across the driveway with high visibility crosswalk markings or use different pavement to denote the presence of the trail. In addition, trail crossing signage should be installed on the approach to Old Coachman Road from the parking lot that would alert motorists leaving the Phillies’ complex to potential trail users. Pinellas County, Clearwater, St. Petersburg and other cities have done a great job building a robust trail network, but attention to detail at conflict points can save lives and reduce the risk of injury.

Meanwhile, I’ll put my helmet back on, suit up with bright yellow clothing like always, and keep my head on a swivel for those unaware motorists.