Drones in Planning: A Tool for Visual Storytelling 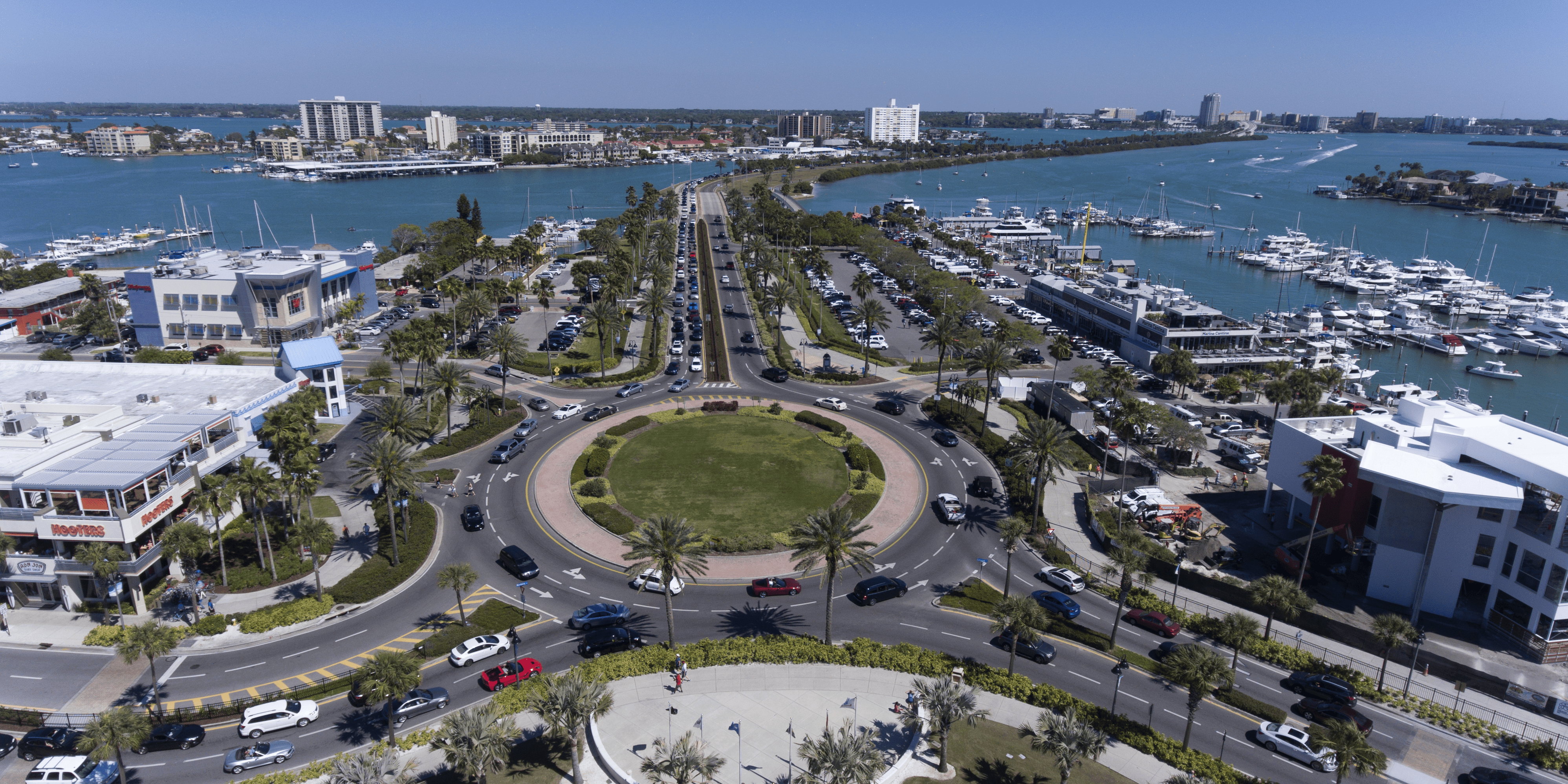 Editor’s Note: This is the first in what we hope is a continuing feature of guest posts written by our partners in the community. Read on to learn about the emerging role of drones in planning from Jacobs planner Chris Zuppa.

Last year, TripAdvisor ranked Clearwater Beach as the number one beach in the country, so it’s no surprise a lot of people come to enjoy the white sand and beautiful bright blue water. There are so many visitors that when the weather is nice on holidays and weekends, S.R. 60, the main road to the beach, backs up for miles – from the roundabout near the beach to Downtown Clearwater.

When I’m stuck in traffic, which is pretty much daily here in the Tampa Bay area, I sometimes imagine my car taking off like the flying DeLorean in “Back to the Future” and flying over the bumper-to-bumper traffic stretching into the distance. It’s fantasy, but imagine a bird’s eye view of the line of cars on S.R. 60 stretching from the beach to the mainland. It would be a compelling image to show people how little space there is to accommodate all the cars going to the beach and the challenges pedestrians have crossing the road.

S.R 60 is one example of the many problems urban planners are working on behind-the-scenes to help make travel more convenient and safer in the county for residents and visitors.  I believe that compelling, interesting images can help get the public involved by raising awareness of these types of planning problems.

Before becoming an urban planner, I worked full-time as a photojournalist (I’m still a practicing photographer) and found it rewarding when readers reacted to images and videos I produced. I’ll never forget the time the community rallied to help a homeless teenager, in part because of the photographs I took that documented his struggles. While at the newspaper, growth management was the topic of news stories after the state legislature passed new rules redefining the density of urban areas around 2009. Because policies that direct land use can be abstract and dry, I believed aerial images would be a visually interesting way to tell the story. So I pitched an aerial photo essay, or a collection of photographs, to my editor to show Florida’s growth to readers.

There was one problem. It was an expensive proposal for a newspaper on a tight budget, potentially costing thousands of dollars, because the only way to fly was by helicopter or a small airplane. My editor turned the original idea down. As a compromise, I photographed the essay using an antique film camera to give the photographs a unique look from the ground.

Today I think I’d have better luck with my pitch if I were still at the newspaper. Aerial photography and video is now more attainable and the cost is becoming more reasonable thanks to innovations in Small Unmanned Aerial Vehicles, better known as drones, and new regulations from the Federal Aviation Administration (FAA).

Part 107 of the regulations, which went into effect on August 29 last year, makes it easier for people to get a license to fly drones commercially. Prior, you had to have a pilot license to fly a small airplane or helicopter and receive a special exemption from the FAA. Now you need to only pass an aeronautical knowledge test (which requires preparation) and follow the laws governing drone flight. While drones still cost between $1,000 to more than $31,000, they are still cheaper than the helicopter camera systems used for high-budget films, and they can capture cinematic-quality video.

INCORPORATING DRONES INTO THE PLANNING PRACTICE

On a recent Saturday afternoon, a colleague and I flew a drone over S.R. 60 to capture the congestion during peak season at PSTA’s request. The images we took from the air – which you can see in the video above and the photo gallery at the end of this post – show how little room there is to accommodate the amount of cars going to the beach and how intimidating it can be for pedestrians to cross the road. For another project where we used a drone, the aerial perspective gave engineers and planners a good look at how the crosswalk configuration could be improved for pedestrians. Looking ahead, I believe that drones can be used regularly to show what corridor conditions look like at different times of day to better communicate regional travel demand to the public.

The application of drone technology does not stop with photography and video. Drones can be used to create 360-degree images, develop 3-D models, and pre-visualize a project on a corridor by overlaying a rendering on the aerial image. As the technology improves, planners will have better opportunities to be visual storytellers.

Drone technology presents an opportunity to better inform the public about planning projects, especially to younger digitally savvy audiences. Quality photographs and video can conveniently be shared using digital platforms such as Facebook, Vimeo, and YouTube. A cool and compelling video or photograph tied to a project can be shared over and over, bringing more awareness to the planning issue being studied. In turn, by better engaging a larger audience perhaps more people will provide community input, consensus can be built around ideas, and practical planning solutions can be implemented.

After a career at newspapers, Chris Zuppa works at Jacobs where he assists senior planners with all aspects of transportation planning studies. He is an FAA-licensed drone pilot and continues to produce videos and photography for Jacobs and others in the Tampa Bay community. Chris holds two master’s degrees in Journalism and Urban and Regional Planning.