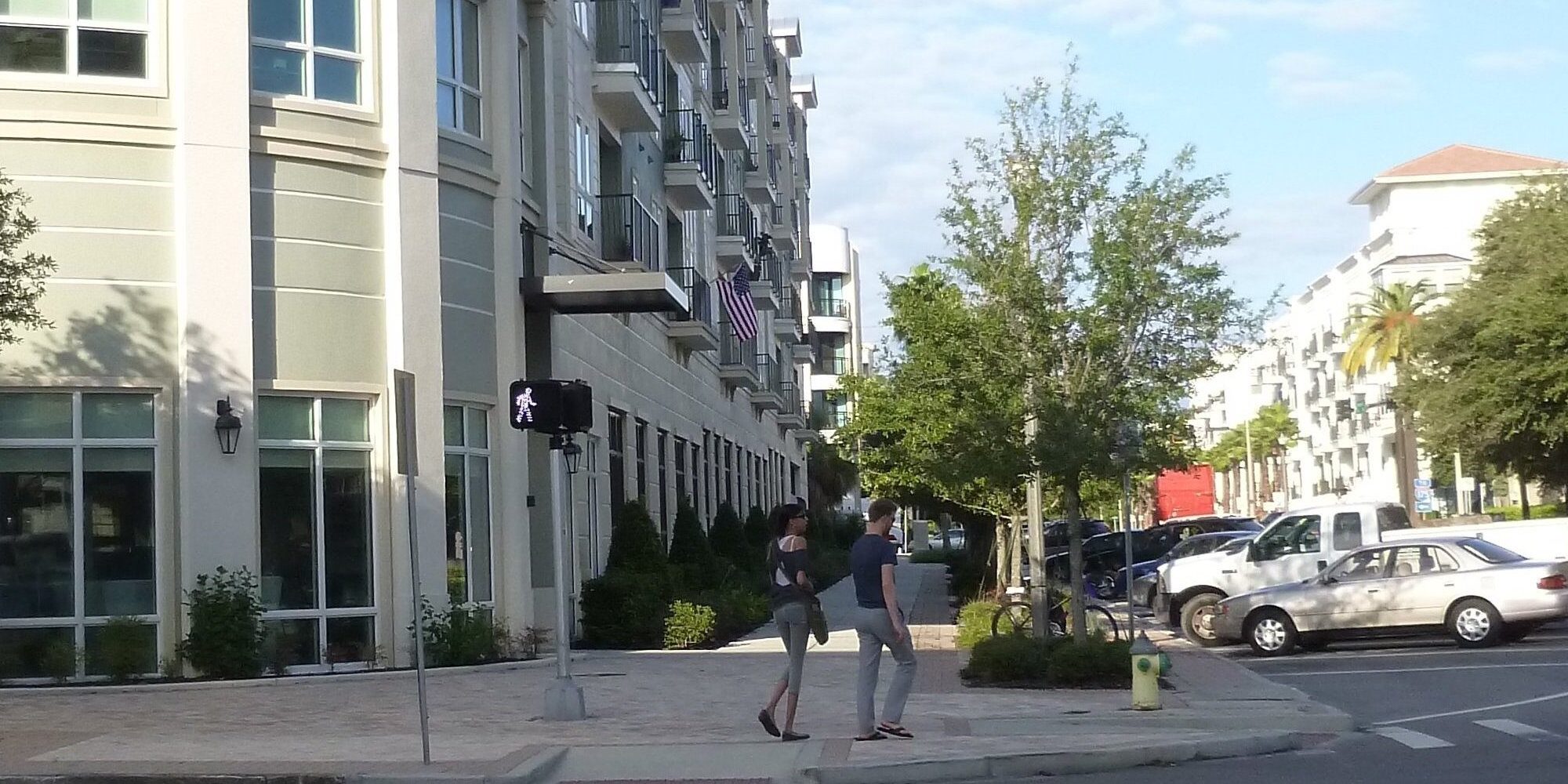 4th Avenue South traces the history of St. Petersburg, and foretells its future.

While Central Avenue is grabbing attention for leading downtown St. Petersburg’s commercial rebirth, a few blocks away lies 4th Avenue South, perhaps the clearest indicator of this city’s urban evolution and a guidepost for how other areas in Pinellas County may change.

The tree-shaded street with its large new apartment buildings, wide sidewalks, and easy walk to downtown shops and restaurants attracted Erica Lindquist, a 42 year old housing specialist who recently moved to St. Petersburg from New York City. She lives in Beacon 430, a four-story, 326-unit apartment building that opened last year. “Being able to walk was a huge factor for me,” Lindquist states. “I hadn’t owned a car in 15 years.” Though she commutes by car to her job in New Port Richey, she is able to walk or bike almost anywhere else she needs to go, be it Publix, CVS, Vinoy Park, or to Tropicana Field to take in a Rays game. “On the weekends, I often don’t drive at all,” she adds.

Beacon 430 is just one of several prominent multifamily developments along 4th Avenue South, which also features the 277-unit Madison, 125-unit Urban Landings, and 112-unit Sage, among others—most built in 2007 or later. They will soon be joined by 330 Third, a 17-story, 358-unit development under construction at the avenue’s intersection with 3rd Street South.

From a transportation perspective, this roadway is a corridor in transition, serving a variety of purposes. In addition to providing access to the new residential buildings, as a one-way street, 4th Avenue South serves a large proportion of through traffic with its direct link to the interstate from the southern downtown area, including the City’s Innovation District, which includes the University of South Florida St. Petersburg, two major hospitals, a working waterfront, Albert Whitted airport, the Dali Museum, the Mahaffey Theater, and a host of other healthcare, education and research facilities. It also serves as a truck route. With cars, trucks, bicyclists and pedestrians all competing for the same space, challenges exist in providing for the safety of the diverse road users.

Still, Lindquist feels safe walking and biking on the corridor. Outside of peak hours, “it’s actually very quiet,” she says. “I can sit on my patio and there’s not a lot of traffic.” 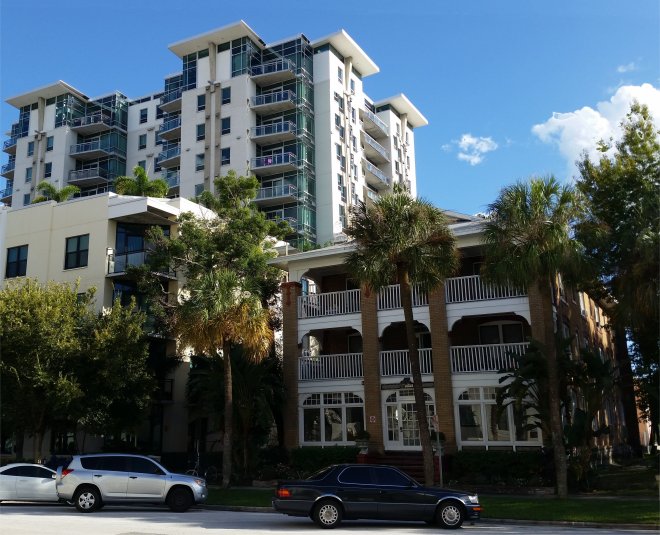 The City in Microcosm

The City of St. Petersburg has had many identities since its founding in 1875. From its beginnings as a railroad and port town in the 1910s, to a retirement and tourism mecca in the mid-century, to its evolution into a culturally diverse urban destination in the 21st century, the city has made an art of reinventing itself. Perhaps nowhere is that history captured more perfectly than 4th Avenue South.

The roadway’s evolution has been dramatic. Historically, 4th Avenue South served an area primarily developed with large single-family homes. First settled with residential development in the 1910s and 1920s, it still boasts a sampling of arts-and-crafts apartment houses (three of which are on the Florida Historic Register) mixed in with more modest bungalows. Over the decades, the edges of the corridor became home to some of St. Petersburg’s major cultural landmarks, including Al Lang Stadium, former home to spring training baseball and now host to the Tampa Bay Rowdies of the North American Soccer League, on the downtown waterfront; Webb’s City, the famous “World’s Most Unusual Drug Store” that spanned several city blocks along the corridor between 7th and 10th Streets from the 1920s through the 1970s; and Tropicana Field, home to the Tampa Bay Rays, at the street’s western terminus at 16th Street.

More recently, a downtown St. Petersburg renaissance is making it a more popular place to live, work and play. The City has revamped its development rules to permit increased densities to meet this demand, while at the same time providing strict urban design requirements to maintain its historic character. Those changes have fueled 4th Avenue South’s surge in multifamily redevelopment, replacing the modest single-family housing stock with high-end condominiums and apartments, while attracting a more diverse range of people who desire an urban lifestyle in which cars are optional and various destinations easily accessible. With those changes come challenges like housing affordability, the need for better transit service connecting the city and region, and managing other demands on the city’s stormwater and other facilities.

Though the recent changes to the corridor have already been dramatic, the future promises to continue the corridor’s evolution. The City’s Waterfront Master Plan, approved in 2015, calls for an integrated vision for the entire downtown waterfront, and anticipates big changes to 4th Avenue South. The plan calls for a reconfiguration of the eastern end of 4th Avenue to create a direct connection to the waterfront, with a focus on safely accommodating pedestrians and bicycles.

Opportunities for further development remain. The corridor is still dotted with aging commercial properties and low-rise multifamily structures that could be redeveloped at higher densities, should the market continue to warrant. Among them are a few historic structures that house multiple residential units, but do not have any historic designation protecting them from redevelopment. These structures could become prime targets for replacement with higher-density multifamily buildings. Should the Rays relocate, the potential redevelopment of Tropicana Field is another factor in 4th Avenue’s evolution. 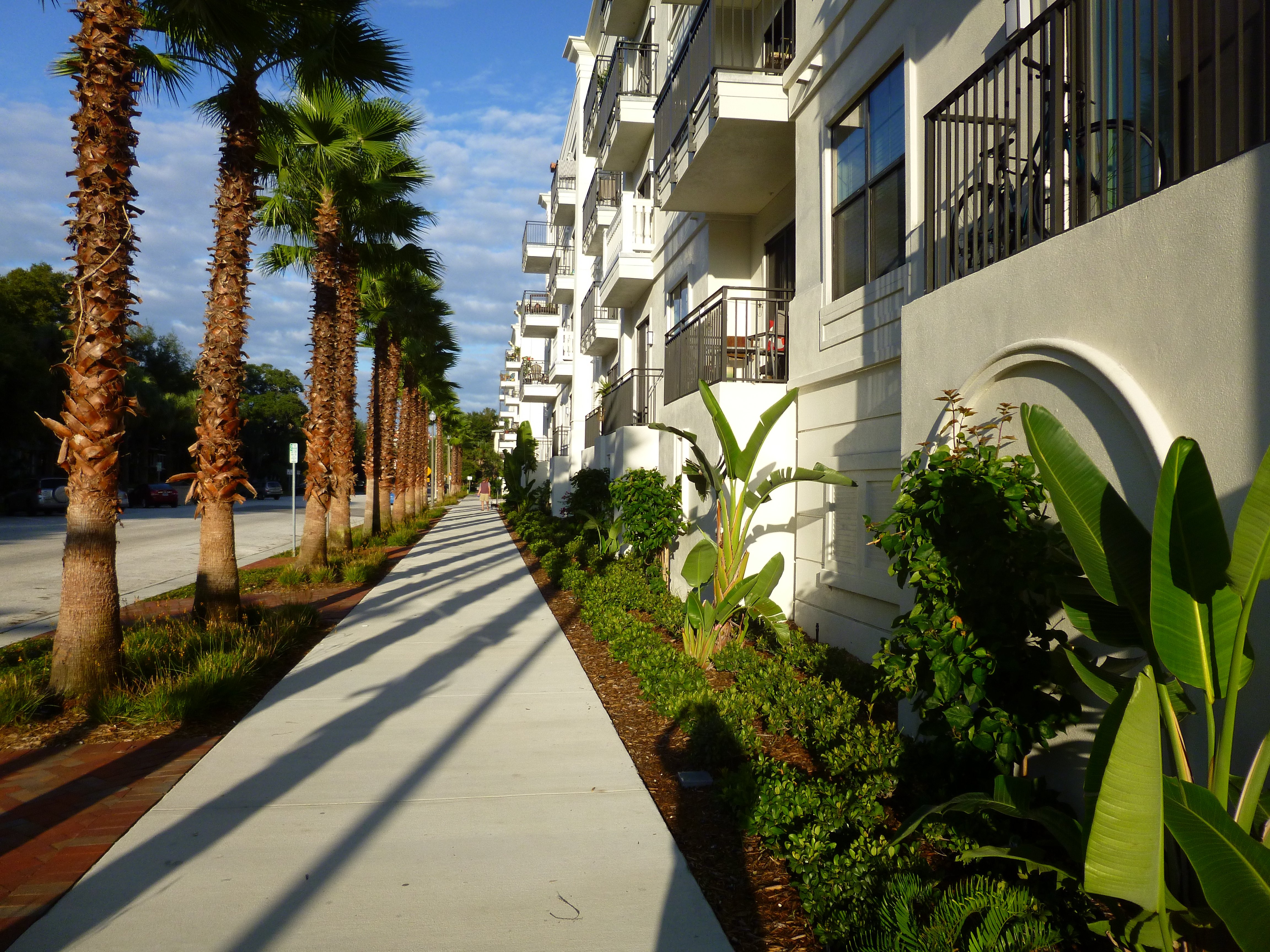 Convenient walking and biking from Beacon 430.

With the potential for additional residents and enhanced connectivity to the waterfront, there are opportunities for increasing transit service along the corridor, as well as providing more accommodations for bicyclists. There is only one bus route serving the corridor, and only between 1st and 4th Streets. The City is partnering with the Pinellas Suncoast Transit Authority to evaluate transit service in the downtown area and identify opportunities to enhance service, including along this roadway. The City is also actively seeking funding to add a direct connection to the interstate on nearby 4th Street, which would remove much of the through traffic. With fewer autos and trucks on the corridor, opportunities to improve bicycle accommodations become more viable. The City’s planned bike share program, anticipated to begin operations in Fall 2016, is a big part of that effort.

One thing that seems certain is that 4th Avenue South—like the city surrounding it—will continue to grow and change. With the recent changes in downtown St. Petersburg and the future plans for the waterfront, the form and function of this corridor will continue to be redefined, evolving with the urban area it serves.