A Walk on the Streets of Largo 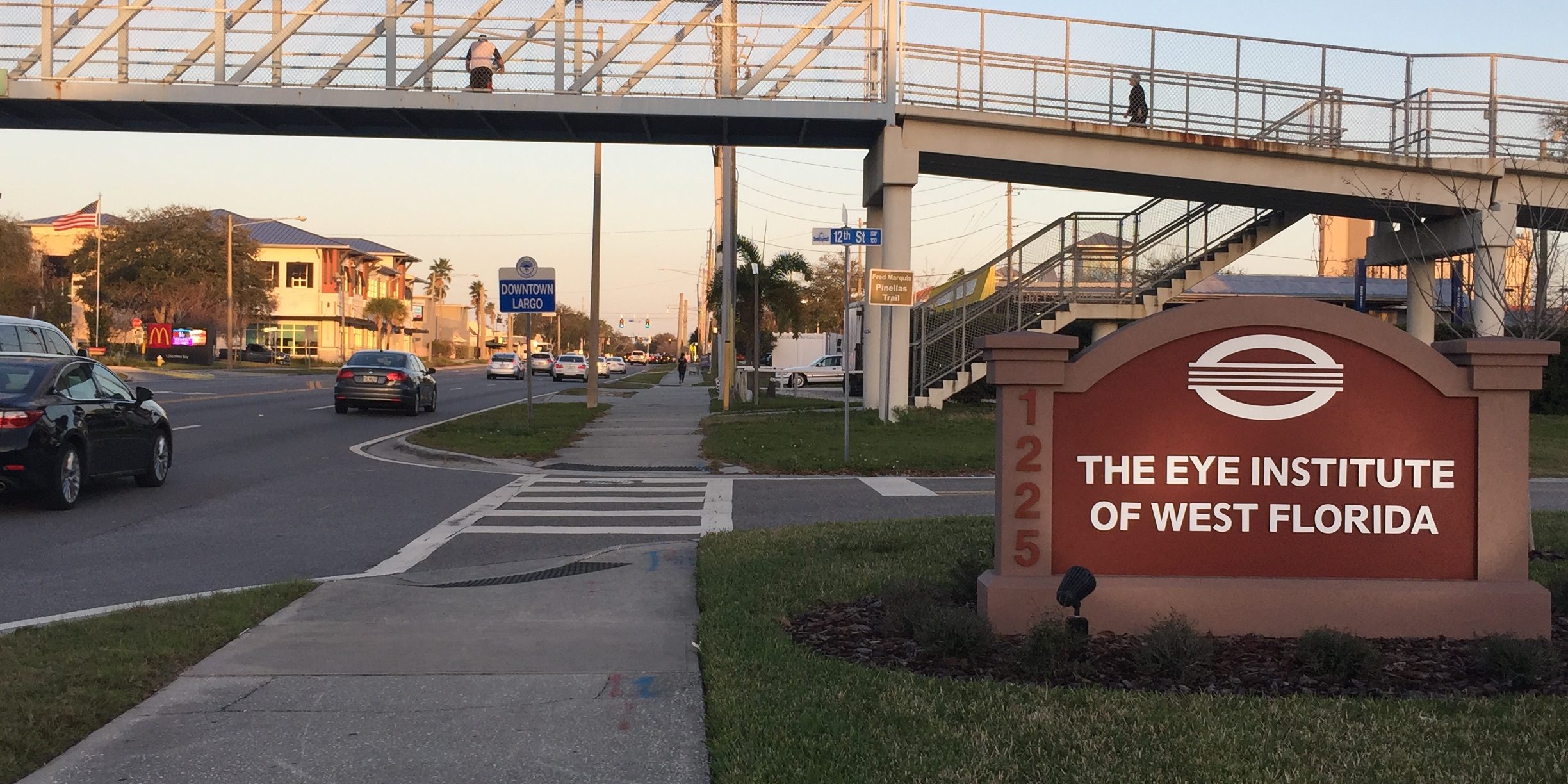 I set out on a warm and sunny winter day after work, before the next cold front arrives, to meet the dual objectives of exercise and to enjoy social interaction at a local gathering spot in nearby Largo. It’s a 1.3 mile walk from my place in Belleair Bluffs along West Bay Drive to the Barley Mow, one of Pinellas County’s many excellent breweries. Walks like this help to compensate for lapses in the healthy diet I’ve generally tried to maintain since moving here.

I also like taking these walks in different parts of Pinellas County to see what’s working well and not so well in terms of development, safety and accessibility from a perspective of the user. There’s no substitute for experience using all forms of the transportation network, whether as a pedestrian, cyclist, transit rider, emergency responder, or car and truck driver.

The Pinellas Trail at West Bay Drive in Largo. The trail lacks any direct access by bicycle, undermining its value to the City’s emerging downtown district.

In that short 26-minute jaunt to the pub at sunset in the daylight, and on my return in the dark twilight of evening, I witnessed a crazy combination of errors, unlawfulness and omissions that I think typify Pinellas County and Florida:

Car drivers making left turn lanes across traffic directly into my path as I crossed a driveway entrance and a marked crosswalk, with one driver using the full lane of approaching traffic to speed in front of me walking in the middle of the intersection. I’m either invisible or do not matter.

A middle-age couple on bicycles, clad in the black-gray colors of pavement with very dim lights riding on the sidewalk in the opposite direction of traffic. At least they had helmets for the inevitable crash.

Two incidents of road rage, with curses shouted and horns blaring, including a situation in which the inconvenienced motorist whipped into an aggressive u-turn to chase and further harass the offending driver. We so need Open Carry legislation.

One limping pedestrian trying to run awkwardly across five lanes of traffic as approaching westbound traffic rapidly bore down on him. He made it, his heart surely racing. The least among us….

Multiple high-speed curb designs on West Bay Drive to driveways and residential side streets that enable fast right turns by cars. They made me uncomfortable proceeding without stopping to look over my shoulder for overtaking right-turning vehicles. Such a design clearly sends a signal about who has priority.

Two older bicyclists waiting patiently at the traffic signal to cross busy West Bay Drive and Clearwater-Largo Road, both apparently traveling with purpose. All the bicyclists I saw were on the sidewalk, a crash-prone area where people ride out of fear of an even worse crash in traffic.

Clearwater-Largo Road and West Bay Drive is a busy multimodal intersection in the City of Largo’s emerging downtown district. The Publix grocery and other nearby retail and medical office uses attract many pedestrians and bicyclists and it’s on PSTA’s Route 52.

Good use and timing of pedestrian signals activated by the people waiting to cross busy roadways with well-marked crosswalks. We have at least cultivated a sense of patience among pedestrians if not drivers.

And while I’d experienced it a few times earlier on my bike, I was reminded how big a disconnect we have between the Pinellas Trail and businesses along West Bay Drive and Clearwater-Largo Road in Largo. This is the City’s designated downtown district, and we limit access to and from the trail as if it’s a restricted access highway like I-275 or US 19.

East-west access to the Pinellas Trail in Largo is what you make of it. A local street stubs out at this user-defined access point. We can do better.

Walk any one mile stretch of urban arterial in Pinellas County and you’ll see many of the same things. Gandy/Park Blvd., Ulmerton Road, Alt US 19, 49th Street, 66th Street, Gulf to Bay, Seminole, 580/Main Street, and 4th Street, we have many corridors that exhibit this Wild West flavor, where being on the defensive takes on a different but eerily similar meaning to the days of The Good, the Bad and the Ugly.

The missed opportunity is that there’s revenue to generate for businesses and create expanded economic opportunity for people that springs from better access. But we sacrifice it for mobility…the speed to get from point A to point B as quickly as practical. We in Pinellas County are losing out on a lot of economic potential by neglecting the importance of access. We do that by favoring the perceived economic gains from rapidly moving cars through areas rather than connecting people to areas.

The point is, in our urban environment with precious little room left for new development or new and wider roadways, we need to get the most out of what we’ve got. We’ve spent millions building sidewalks, trails, safer intersections, and nicer corridors, but we still kill or seriously injure hundreds of cyclists and pedestrians a year. We have great destinations but we are a county that is among the highest crash rates for vulnerable road users. We need a new approach.

That’s in part because we often miss the little details of access that undermine walkability, bicycle-friendliness and transit attractiveness in our communities. Too often we respond with solutions that are one-dimensional and short-sighted, which fail to make the bigger connections necessary for travel choices, economic competitiveness and continued vitality.

We are taking a Vision Zero approach to safety in partnership with local agencies and the Florida Department of Transportation, with an initial focus on Gulf Boulevard that we hope will yield insights and applications for elsewhere in Pinellas County. Vision Zero means a real commitment to safety, with investment in the “Five Es” of education, engineering, encouragement, enforcement and evaluation to reduce our fatalities and severe crashes and keep them low. I’ll add a sixth E for equity, which is also very important in addressing the needs of people who must walk, bike or take transit because they lack other options.

If we are to become distinctive as an urban county that works, that functions well, and serves the needs of all its citizens and communities, then we have to do better in those key areas to support our land use and transportation system. We have to clearly define our vision, desired outcomes (e.g., zero fatalities) and the strategies for making them happen. That will take time and a commitment to results among all our partners.