Transportation Leadership on the Agenda for Tampa Bay

In the wake of failed transportation funding proposals in Hillsborough and Pinellas Counties, there’s a growing chorus of voices on both sides of Tampa Bay about how we finally figure out a way to pull together as a region to solve our transportation problems. State and local government officials have long advocated for a regional transportation agency, one that unifies the region…one that is the go-to entity for getting things done…one that has teeth.

The U.S. Department of Transportation just added focus and urgency to that discussion by proposing a new rule on coordination of regional transportation planning within a single metropolitan area. The rule would push diverse regions like Tampa-St. Petersburg with multiple metropolitan planning organizations (MPOs) to merge into a single transportation planning organization serving what is expected to become the metropolitan area over the next 20 years. That draws in Polk, Manatee, Sarasota, Hernando and Citrus Counties to the discussion. The proposed federal rule affects more than 140 MPOs across the country, including more than half of the MPOs in Florida. It gives those regions the option of maintaining separate MPOs while developing a single long range transportation plan, agree upon a single set of performance measures and targets for transportation, and adopt a project priority-setting process for the entire region.

Been There, Done That 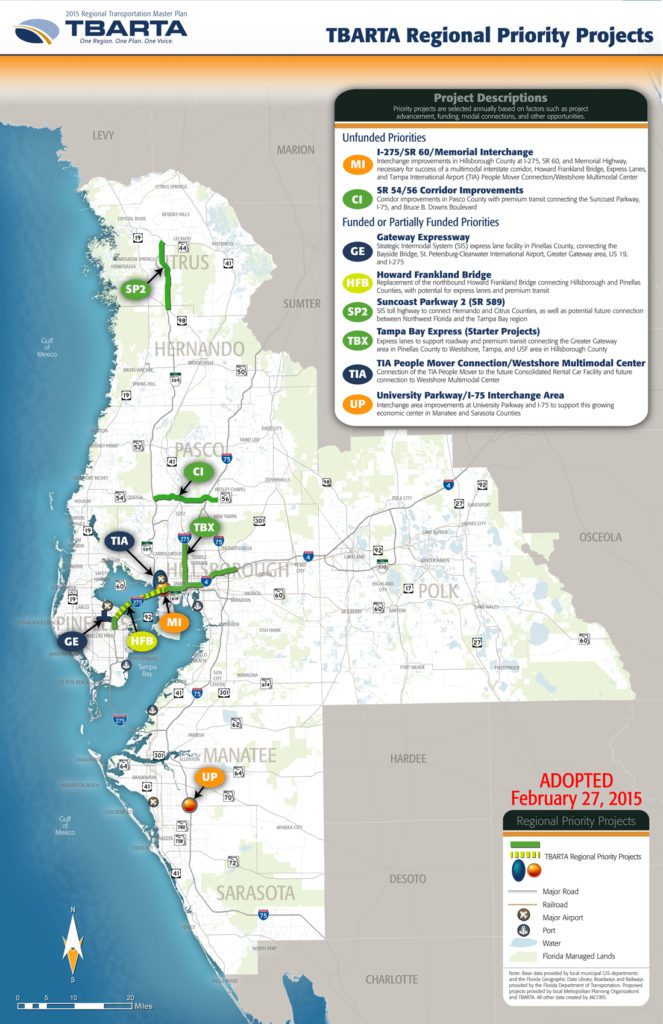 It’s an approach we’ve tried before. In 2007, the Florida Legislature and governor approved the Tampa Bay Area Regional Transportation Authority (TBARTA) at the behest of area state legislators and the region’s business community, with support from county administrators. TBARTA continues to do many good things for the region, but it is limited by its lack of financial authority and a broad regional responsibility that lacks focus on the Hillsborough, Pasco and Pinellas urbanized area.

Beginning three decades ago, the MPOs themselves have created regional coordinating and policy-setting alliances through groups like the West Central Florida MPO Chairs Coordinating Committee (CCC) – now part of TBARTA – and the Transportation Management Area (TMA) Leadership Group. I know, right? sexy titles that really capture the imagination. But those governance frameworks have helped shepherd through regional plans that helped steer millions of dollars toward regional roadways, bike/pedestrian trails and a very few transit projects.

Today’s challenge is that Tampa Bay is perceived as falling behind other regions on transportation because we lack regional consensus. The notion is our separate county-specific transportation planning agencies are unable to forge regional consensus to commit the funding needed for the kind of transportation projects people say we need, like a better non-interstate road network, bus rapid transit, rail, bike facilities and ferry service that connects our region. Regardless of whether that’s your belief, there is plenty of evidence that we have serious congestion and safety issues, and we are continuing to fall behind on transportation capital maintenance needs among all local governments, including roads and transit.

The reality is no great regional transportation authority just makes things happen. We live and operate in an increasingly complex and dynamic environment, and both money and partnerships are the key to getting projects done. No single agency can do it all. The planning and funding structure in place under state-mandated Growth Management is now a loosely organized framework, and the regional planning councils created in the 1970s to guide growth and sustain the environment have long been defunded and debilitated politically. Funding authority still mainly rests with county commissions that must balance many competing needs, large geographies and distinct political constituencies.

So, what will be different this time? That’s an important question. We don’t lack for regional organizations; we lack a commitment on a regional transportation strategy and a way to pay for it that the public will support. I’m not sure we can count on the Florida Legislature or Congress to solve the state and federal funding problem for us, but we can leverage more federal and state funds with regional leadership and commitment to complete the critical gap projects that link the diverse communities of Tampa Bay.

The MPOs are charged with setting priorities for a limited resource, largely controlled by others, that people often perceive is spent inequitably (either by geography or mode). We need an independent, broad-based study of the many options to accomplish our goals. That should include looking at ways to strengthen our existing regional process while also examining a variety of regional governance structures, and clearly thinking through the mission, role and responsibilities that best suits the Tampa Bay region, however that is defined. Examples to look at beyond MetroPlan Orlando include regional Councils of Government like Seattle PSRC, Denver DRCOG, and San Diego SANDAG. Each has shown regional success by integrating a broad range of responsibilities to get things done.

There is a good case to be made for using our existing regional decision-making framework more effectively. We have a tri-county framework in place since 2014, when the Pinellas, Pasco and Hillsborough County MPOs committed to a unified approach to regional transportation and development of priority project recommendations through the TMA Leadership Group. It is a minimalist approach and can be strengthened through further definition of its mission, bylaws and work products.

We need to keep in mind that land use planning is different in Pinellas County versus Pasco or Hillsborough; and in 2014 the Legislature unified the Pinellas MPO with the Pinellas Planning Council under a single 13-member governing board of elected officials to guide land use and transportation planning. That is proving to be a useful structure for Pinellas’ 25 local governments, and I argue we need to strengthen the land use-transportation linkage regionally rather than further separate them. The options we explore must include what kind of organization we want…one that provides stronger regional leadership; one that can generate more funding; one that can guide and support well-planned growth and economic development; one that is focused on strategic, yet equitable projects across the region.

We are starting this conversation in earnest next month. We need to think about the outcomes we want as a region and how we might best organize ourselves to achieve them. We have work ahead of us.