Pasadena Avenue Project to Focus on “All” Users 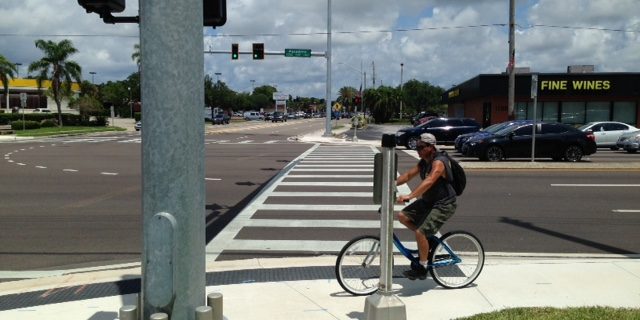 “I ride my bike to work every day,” Justin Doyle told me while pouring beers 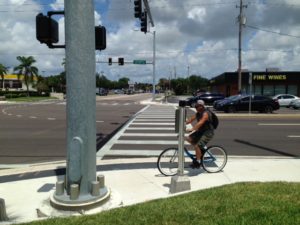 on a hot July afternoon at the Horse and Jockey Pub in South Pasadena.  He was responding to my questions about bicycling on Pasadena Avenue, where the pub is located.  I’ve biked on the corridor myself many times and have always been surprised by the number of other bicyclists I see there.  With the high speed traffic and absence of bike lanes, most of them opt to ride on the sidewalk rather than the road.  “I also ride on the sidewalk except when the road is clear of traffic,” added Justin.  He agreed that bike lanes on Pasadena Avenue would be helpful.

I asked if there were other improvements he would like to see on Pasadena Avenue. Looking toward the driveway entrance, Justin stated, “left turns should not be allowed there.”  The median opening in front of Horse and Jockey is not aligned well with their driveway making a left turn maneuver problematic.

Bicycle accommodations and accessibility to and from adjacent businesses will be among the issues that will be the focus of a Florida Department of Transportation (FDOT) project development and environmental (PDE) study scheduled to begin in December. The study will address the needs of all road users, including walkers and transit users as well as motorists and bicyclists, between Gulfport Boulevard and Shore Drive.  The improvements identified in the study will be constructed as part of a $2 million resurfacing project scheduled for construction in 2018.

After my visit with Justin, I walked across the street to Health Food Plus and Herbs. Halina Kwiatowski is the owner.  She’s concerned about access to her business.  “People can’t make left turns to my store,” she stated.  Halina has a point.  The center median in front of her store doesn’t allow south bound motorists to reach her driveway without making a U turn.   She asked that I share that information with FDOT when they begin the study.

Most people familiar with Pasadena Avenue know it as the way to get to St. Pete Beach. But for the residents of South 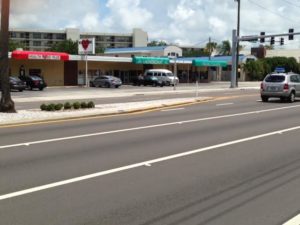 Pasadena, a city of 5,000 people, it’s their main street.  City leaders would like to see the corridor look more like a main street with a vibrant business community and road and land design features that create an attractive walkable environment.  This was the purpose of the Pasadena Avenue Corridor Redevelopment Plan that was approved by the City Commission in 2012.

The Plan became a source of controversy subsequent to its approval when a vocal group of residents emerged to oppose it. Dan Calabria, who was elected mayor in March, 2013, campaigned against the plan and won handily over the incumbent.  “It was a politically explosive situation,” described Dave Healey of Calvin, Giordano and Associates, who developed the plan for the city.  “Their main issue with the plan was the proposal to reduce the vehicle lanes from six to four,” he recalled. Dave added that Calabria’s opposition was also based on his contention that FDOT would never approve it.  The reduction of lanes was intended to allow the outside lanes to be designed exclusively for transit buses and bicyclists. Calabria lost his re-election bid to incumbent commissioner Max Elson in March.

Forward Pinellas will be working with FDOT and its community partners to make sure the safety and access needs of the corridor are addressed and that the improvements implemented through the resurfacing project help the city begin to realize its vision for the corridor. The City’s vision is consistent with FDOT’s Complete Streets Policy adopted in 2014, which recognizes that road improvements must be “context sensitive” and designed to serve the needs of all transportation users.  For bicyclists like Justin, that would mean not having to move to the sidewalk.