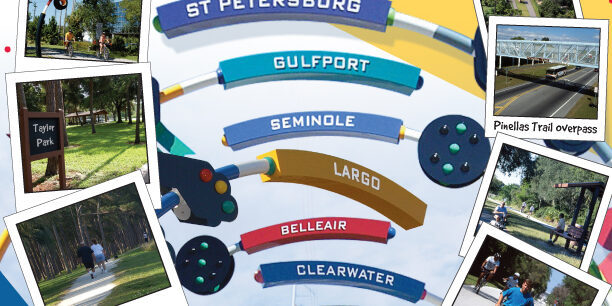 The Pinellas Trail story began as an idea to provide a safe place to bicycle.  In 1983, the Florida Department of Transportation (FDOT) purchased an abandoned rail line and the concept for a linear park throughout Pinellas County was born.  Two Trail preview sites were built near Seminole City Hall and near Curlew Road/Alternate U.S. 19 in Dunedin in 1990.  Through coordination and partnerships, a proposal for a one-cent local option sales tax found overwhelming community support.  With funding in place, the Pinellas Trail could now be expanded countywide.

The majority of Pinellas Trail users travel by bicycle

The first overpass was constructed in 1991 over Ulmerton Road; the West Bay overpass was built in 1992, and the Orange Street/Alternate U.S. 19 overpass opened in 1993.  Since then, seven more overpasses have been added to the Trail and three underpasses to safely separate Trail users from roadway or intersection traffic.

Runners feel safe as they enjoy using the Pinellas Trail

From the first few miles at Taylor Park, the Pinellas Trail has grown in popularity and usage. Recognized as a premier urban multi-use trail, the Pinellas Trail is now about 47-miles with more than 75,000 monthly users. The Trail has demonstrated great partnerships, boosted the local economy, and has offered additional opportunities for traveling without a motor vehicle.  The Trail also has proved an integral connection for neighborhoods, place-making, and a source of community pride.

The Pinellas Trail has been recognized by various organizations and governmental agencies, such as the Florida Greenways Commission, the White House Millennium council, the National Park Service, and the Rails to Trails Conservancy.  (Read more about awards to the Pinellas Trail here.)

Over the past 25-years, the Pinellas Trail itself has been improved and expanded by local funds, statewide investments and federal funding programs.  Since 1991, Pinellas County has invested more than $37 million (estimated in present-day-dollars) in the Pinellas Trail, with about $6 million in state funds, and more than $38 million through federal funding and grant programs.  Additional multi-use trail programs within the local municipalities have expanded the reach of the Pinellas Trail to connect with additional destinations and even across the waters of Tampa Bay.  Several regional connections include the recently opened Courtney Campbell Causeway Trail, which links the trail networks in Hillsborough County to Pinellas.  More trail connections are planned to provide seamless connections to multi-use trails across the state of Florida.

I began working with the Pinellas County Metropolitan Planning Organization (MPO) more than 25 years ago.  Since that time, I’ve learned that walking and bicycling can be risky business, and safety education became an important part of my first few years.  I would visit summer camps, school assemblies, community events and teach children how to walk and bicycle safely.  I’ve taught children and their parents how to properly fit bicycle helmets, check the brakes, tires, and other equipment before riding their bicycles.  I always emphasize that all bicycles are vehicles, and as such, must obey all traffic signs and signals.

For myself, life continues to change too.  I now have four young grandchildren and I’m more concerned than ever about pedestrian and bicyclist safety.  Planning safety for the very young and very old has become more important – and personal – as I approach my senior years and discover I’m not as nimble as I used to be.

The Pinellas Trail and other trail connections offer our residents and tourists a safe and enjoyable means to get around the County. This is something to be celebrated.

Be predictable. Be visible. Be aware.