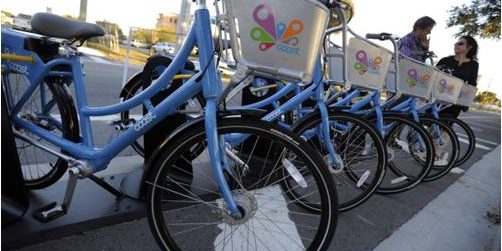 In April, the St. Petersburg City Council approved funding for a bike share program in its downtown area.  The program will launch in September with the roll out of 30 stations and 300 GPS-enabled smart bikes.  Now the City needs to figure out where to locate the stations and they’re looking to the locals for help.  On June 15, about 20 City residents, including representatives of various civic groups ranging from the Chamber of Commerce to the St. Petersburg Bicycle Cooperative, gathered at the Sunshine Center to take part in the process of selecting locations for the stations.

The workshop opened with St. Petersburg Bicycle and Pedestrian

Coordinator Lucas Cruse and Coast Bike Share Program Director Eric Trull presenting an overview of the program.  Coast Bike Share will be managing the program for the City. After the presentation, the audience broke into five small groups.  Each group received a large map of the downtown area and surrounding neighborhoods, along with a set of colored dots.  The participants were asked to place their 30 dots on the sites where they felt the stations should be located.

Trull provided some basic criteria for choosing the locations; such as quarter mile spacing between stations, to the extent possible; easy access for maintenance crews and proximate distances to major origin and destination points where people live, work and play.   Trull explained that the final decision on the station locations will also consider the need to serve economically disadvantaged neighborhoods even if they exceed the general spacing criteria. “Equity is a big thing for us,” he noted.

Among the most popular locations selected by the groups were the local hospitals, Tropicana Field, the St. Petersburg Pier and Shuffleboard Club, USF, Straub Park and multiple locations along Central Avenue.  Cruse anticipates the City will schedule a second and final public workshop in early August.  Residents can also go online, 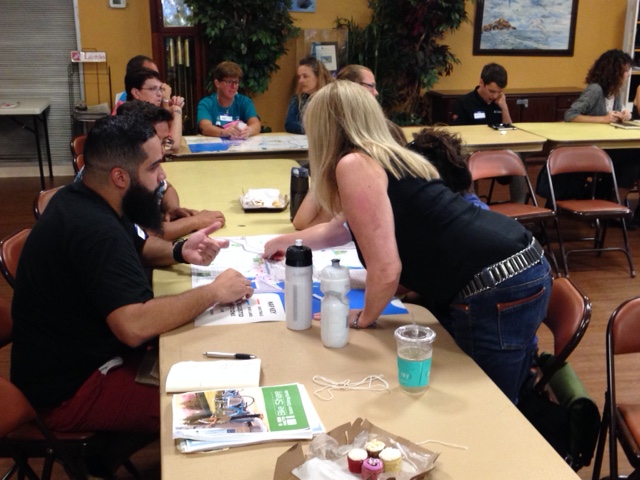 http://coaststpete.com, to suggest a station location.

“I’m from St. Petersburg, so I’m excited to bring this program home and see it succeed here,” Trull said. He is optimistic about the chances for success in his hometown.  If Tampa is any indication, he has good reason to be optimistic.  In a city not known for its friendliness to bicyclists and pedestrians, Tampa’s downtown area bike share program attracted more than 11,500 member participants in 2015, its first year.

St. Petersburg has several factors working in its favor to make bike share a viable transportation alternative. They include an established network of bike facilities and trails along with a grid pattern of streets to make the City attractive for bicyclists.  As the Pinellas MPO concluded, bike share is a feasible endeavor for areas beyond St. Petersburg, but the commitment of the beach communities and other cities like Clearwater, Dunedin, Tarpon Springs, Largo and Safety Harbor remains to be seen. Other Pinellas municipalities with downtown areas more favorable for bicycling than Tampa are exploring the possibility, and the connections provided by the Pinellas Trail and other trails in the county provide the backbone for such a countywide network.