The rising tide: Adapting our coastal communities to a changing climate

Pinellas County is regarded by many—justifiably—as a coastal paradise. But last year’s run-in with Hurricane Irma reminded us all that life on the coast has its dangers, too. With global temperatures steadily warming, research suggests that hurricanes are growing stronger and waters are rising higher.

Communities need to plan their future growth carefully to keep as many residents and businesses as possible out of harm’s way. Fortunately, the state and federal governments are providing new tools to help local governments identify hazardous areas and either steer development away, or build it to be more resilient.

It’s not too soon to start planning: the next hurricane season is only months away.

In 2016, the National Oceanic and Atmospheric Administration (NOAA)—the agency that oversees the National Weather Service and National Hurricane Center—updated the computer model it uses to identify especially hazardous coastal areas. And as the model has improved, so has our understanding of the potential threats.

Officially called Sea, Lake, and Overland Surges from Hurricanes, but better known as SLOSH, the model crunched data from almost 93,000 storm scenarios to predict the maximum flooding from hurricanes of various strengths. The most vulnerable areas, which are prone to flooding even in (comparatively) weaker Category 1 storms, are known as the Coastal High Hazard Area. 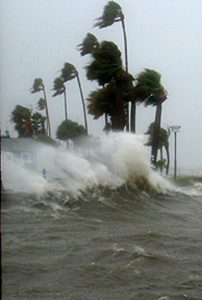 “These are places where you have the highest risk from a combination of high-velocity wind and coastal storm surge flooding,” says Joe Borries, operations manager for Pinellas County Emergency Management.

This year’s news is bracing: compared with the last SLOSH update in 2008, the Coastal High Hazard Area has grown by nearly 21,000 acres in Pinellas County—an 86 percent increase. According to data from the Pinellas County Property Appraiser’s Office, roughly 25,000 more houses and 8,000 other buildings are located in the newly-designated area. Overall, the Coastal High Hazard Area now covers about 25 percent of the land area in the county.

Development in the Coastal High Hazard Area is limited by both the Florida Statutes and the Countywide Plan. These areas are not only found along major coastlines, but also further inland near lakes, rivers and creeks, where storm surge can be pushed during a hurricane.

Vulnerable uses such as nursing homes and mobile home parks are prohibited in the Coastal High Hazard Area, and increases in other development are strongly discouraged. Communities seeking to allow more growth in these areas need to show that they’ve made enough investments in shelter spaces and evacuation routes to protect any new coastal population.

Why has the Coastal High Hazard Area grown so much? In large part, the technology we use to model storm surge has simply gotten better. The number of storm scenarios was increased nearly eightfold from the 2008 SLOSH. They were also simulated over larger areas: six previous study areas were combined into a single storm basin covering most of the Florida peninsula, allowing better modelling of how real storms behave. 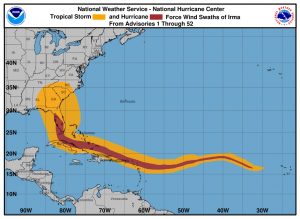 The update brought a timely benefit: “The new model has better simulation for storms that approach from the south and ride northward along the Florida Gulf coast,” says Brady Smith, director of resilience for the Tampa Bay Regional Planning Council, which helps with validating the SLOSH model for our area. “We haven’t had a good model for that in the past.”

That path will sound familiar to those who watched the approach of Hurricane Irma, which caused an estimated $50 billion in damages in the United States. In Pinellas County, updated evacuation zones based on the new SLOSH were released just in time for the 2017 hurricane season, giving residents a more accurate picture of the storm’s potential dangers.

Overall, the SLOSH is “primarily used by disaster planners to model the worst-case combination of factors that contribute to storm surge,” Smith states. But he adds that it’s based on current conditions only, and doesn’t attempt to predict the future effects of climate change.

Our warming climate is causing global sea levels to rise, partly because ocean waters are expanding as they warm, and partly because ice sheets and glaciers at the poles are melting and adding more water volume. A NOAA measuring station in St. Petersburg shows Tampa Bay rising more than 10 inches in the last century, mirroring a worldwide trend. Forecasts of future sea level rise vary, but the scientific consensus is that this trend will continue and accelerate. In coastal communities, rising waters could shrink beaches and inundate public infrastructure.

In 2015, the State of Florida enacted the Peril of Flood Act, requiring coastal communities to adopt “principles, strategies and engineering solutions” addressing flood risks, including the anticipated effects of sea level rise. Examples could include moving or elevating facilities, or buying coastal land to keep as open space. 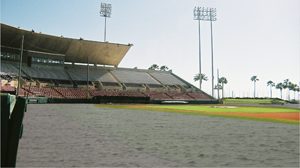 There are a number of online tools and resources to help local governments assess their vulnerability, such as NOAA’s Sea Level Rise Viewer, which maps various climate change scenarios over aerial photographs of communities across the coastal United States. A report by the University of Florida-sponsored Tampa Bay Climate Science Advisory Panel helps local governments understand the different NOAA scenarios—which range from one to 10.5 feet of sea level rise by 2100, depending on how many climate factors are considered—and decide which is most appropriate for local planning purposes.

In addition, the Florida Department of Environmental Protection recently provided funding for three pilot communities, Escambia County and the cities of St. Augustine and Clearwater, to receive technical assistance in assessing vulnerabilities and creating plans to address them.

Clearwater was able to map locations where rising waters are predicted to encroach on the city, including two fire stations and two water reclamation facilities that could be impacted by nuisance flooding. “The model isn’t detailed enough to tell us the depth—it could be one inch of flooding or one foot,” describes Kyle Brotherton, senior planner for the City. “But it does give us a good baseline.” City staff have already started elevating backup generators at those facilities.

Meanwhile, Pinellas County is preparing to launch a comprehensive, countywide vulnerability analysis of its own, which will begin this year and conclude in 2020. Funded with grant money from the 2010 BP oil spill, the project is a partnership with Pinellas County municipalities and Forward Pinellas.

“The impacts of sea level rise will not recognize jurisdictional boundaries,” says Chris Moore, principal planner for Pinellas County and project manager for the study. “Responding collaboratively only makes sense.”

And with an issue this critical, the time to start planning is now.