If you ask Joseph Powell, traveling Bay Pines Boulevard can be a perilous endeavor.

A regular visitor to the C.W. Bill Young Veteran’s Administration Hospital, Joseph relies on public transportation to get around. I spoke to him on September 30 while he was waiting for a bus down the road from the hospital on Bay Pines Boulevard.  I talked to Joseph and others that day who travel, work or live along Bay Pines to hear their concerns about the most heavily traveled section of Alternate US 19. 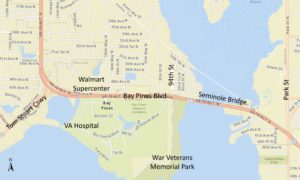 Bay Pines Boulevard will be evaluated as part of the Alternate US 19 corridor study, which begins in November. The study will identify operations, safety and access improvements on a 10.6-mile section of the corridor from Park Street to Belleair Road.  A companion study to the north, focusing on the 15.7-mile section from Belleair Road to the Pinellas/Pasco County Line, begins in December.  The Florida Department of Transportation (FDOT) is funding the two studies.

“It’s about time!” Joseph responded after I informed him about the upcoming FDOT study. He also shared a story about a motorist in a sedan who ran over his foot in the Walmart parking lot across the street from the hospital. He’s still limping as a result of the accident.

Bay Pines Boulevard presents a unique set of transportation challenges when compared to the rest of Alternate US 19. With 47,000 vehicles per day, it is the most heavily traveled section of the road.  This has much to do with the VA Hospital, which served more than 94,000 veterans and 750,000 outpatients in 2015.  It also employs more than 2,300 workers.

Other major destinations on the road include Veteran’s Memorial Park and the recently developed Walmart Supercenter. The road also serves as a major thoroughfare for traffic going to and from Madeira Beach and other coastal communities. 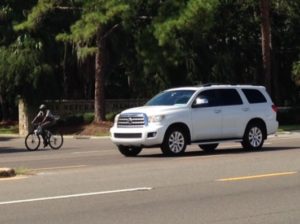 Riding on the sidewalk is the preferred travel option for bicyclists on Bay Pines Boulevard.

The Pinellas Suncoast Transit Authority (PSTA) operates Route 18 along the corridor. With over 1.3 annual riders, it’s number three in the PSTA system in terms of ridership, and first in bicycle trips.

There are no on-street bicycle accommodations on the corridor, so bicyclists are forced onto the sidewalks with the pedestrians where they are at greater risk of being hit by vehicles pulling out of driveways and intersecting streets. In addition, there is a gap in the sidewalk network on the north side of the road between Park Street and the Seminole Bridge.  Moreover, there are no bicycle accommodations or sidewalks connecting Bay Pines to the Tom Stuart Causeway, so beachgoers traveling the corridor don’t have a safe alternative to the automobile.

Larry Good is the owner of the Park Street Antique Center, which occupies the northwest corner of the intersection of Bay Pines and 94th Street.  Larry has seen far too many crashes at this intersection.

“It happens at least once a week,” he stated. 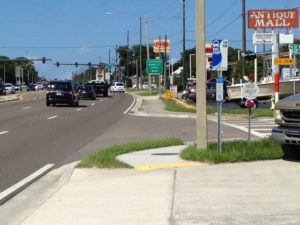 Local residents and business owners say traffic accidents at the intersection of Bay Pines Boulevard and 94th Street are a regular occurrence.

Larry drew up a diagram for me demonstrating what he sees as the major cause of the accidents: motorists using the westbound outside lane to pass slow-moving traffic in the center and left lanes. According to Larry, this has led to collisions with eastbound vehicles turning left from the median and right turning vehicles from 94th Street.

“They need to install something to impede [westbound] through traffic from using the outside lane,” he contended. He suggested rubber bollards or something similar be used as a barrier.

Darlene Skinner agreed with Larry’s suggestion. Darlene is a resident of Harbor Lights Mobile Home Park located at the west end of the four-lane Seminole Bridge.  Where the bridge ends, the road expands to six lanes. At that point, motorists often take the opportunity to move to the outside lane in front of Harbor Lights.

“This makes it difficult for people to pull onto Bay Pines from the park entrance,” Darlene explained.

Forward Pinellas will be working in partnership with FDOT to ensure the concerns voiced by the people who rely on the corridor for transportation and to sustain their businesses are addressed in the study. Other safety and access issues identified in the course of the study, such as the absence of bicycle and pedestrian facilities, will also be addressed.