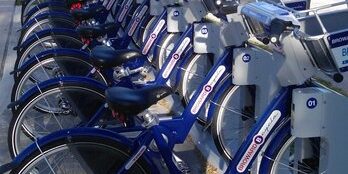 Imagine if you didn’t have to drive to your next lunch meeting with clients, or drive downtown for coffee with your wife on a Saturday morning, or drive your relatives from out-of-town to an early dinner at your favorite restaurant on the beach?  Well, the option of renting a bicycle for those types of short-distance trips may be right around the corner.  The Pinellas County Metropolitan Planning Organization (MPO) is exploring the feasibility of implementing a bike share system in Pinellas County.  What is bike sharing? Well, bike sharing is a cost-effective mobility option for trips too far to walk, but not long enough to take transit or drive. A bike share system consists of a network of stations placed throughout a city, district or area, from which a bike can be taken and returned to any other station for an hourly fee, daily/weekly access pass or annual membership.

Bike sharing was started in Amsterdam in 1965 but is a relatively new concept to the southeastern United States.  Over the past several years, bike sharing programs have become increasingly popular in American cities and around the world. As of August 2014, there were more than 600 bike-sharing programs in 52 countries around the world, consisting of some 500,000 bicycles.

Bike sharing across the world. Source: The information on this map is maintained by Russell Meddin, russellmeddin@bikesharephiladelphia.org, and Paul DeMaio, http://metrobike.net/index.php?s=contact/

American cities of all sizes have implemented bike share systems to expand their mobility options. Washington, D.C. was the first major American city to institute a commercial bike sharing system in 2008.  That system evolved into Capital Bike Share and now operates 2,500 bikes and 300 stations around the greater metropolitan area.  From Bay Area Bike Share in San Francisco to Coast Bike Share in Tampa, Florida to B-Cycle in Greenville, South Carolina, employees, visitors, students and others have greater choice in how they travel to their destinations.  There is only one county-level bike sharing system in the United States and it is located in Broward County, Florida.  Broward B-Cycle was launched in 2011 through a partnership between Broward County Transit and the Broward County Board of County Commissioners.  The system was initially financed through a $311,000 intermodal grant from the Florida Department of Transportation (FDOT) to cover the costs for bikes and infrastructure.

There are several community benefits in addition to providing transportation choices through bike sharing systems.  Bike sharing is a relatively inexpensive and readily implemented option for expanding urban transportation. The cost of one bike share station with six bicycles is typically between $35,000 and $40,000 (based on an analysis completed by the Pedestrian and Bicycle Information Center), about 1/10th  of the cost of one transit bus, or one percent of the cost of a one lane-mile of urban roadway.  A bike sharing system makes both spontaneous and planned urban trips possible by bike and can be an ideal complement to transit trips by providing first mile and last mile connections.  Many bike share programs have been able to cover all or a portion of their operating costs through a combination of sponsorship, advertising and use revenues. This reduces the public funding needs for these programs.  Bike sharing can also reduce the personal cost of urban transportation by offering increased mobility at a relatively low cost.  To this end, bike sharing pricing is set on a graduated scale and typically offers the first 30-to-60 minutes of every ride for a reduced amount, which encourages high turnover of the bikes and increases the probability that stations will have sufficient bicycles available to meet market demand.

Bike sharing programs offer environmental, social, economic and public health benefits. Some cities are implementing bike sharing systems to reduce their carbon footprint for “last mile” trips.  Other communities are realizing the health benefits of their systems.  For example, the tracking of health benefits of trips taken via bike share, as documented in the City of Atlanta’s Bike Share Health Impact Assessment, demonstrate the positive impact of this mode choice.  Bike share programs can also support a variety of economic development initiatives including tourism and urban redevelopment. For example, Capital Bikeshare has responded to system demands by deploying stations around the National Mall and with proximity to local hotels to help provide additional transportation options for tourists and residents alike.  This approach seems ideal for Pinellas County’s strong tourism market, which included nearly six million visitors in 2014 to our beaches, downtowns, museums, and other destinations.

The MPO’s bike share feasibility study is being led by a subcommittee of our Bicycle Pedestrian Advisory Committee (BPAC) as documented in a recent Tampa Bay Times article.  The BPAC hopes to complete its work in early 2016.  Stay tuned, a bike share station may be coming to an area near you.