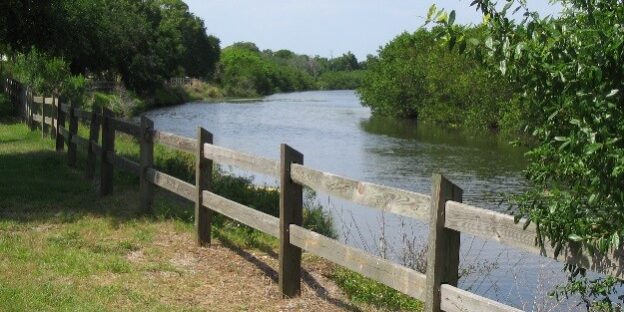 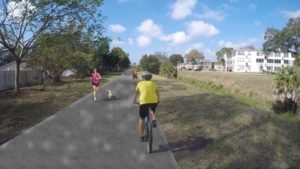 Residents of Lealman and Kenneth City could have another transportation option in their area’s future – one that positively affects community health, is safe, and provides an inexpensive option by not requiring a car.

Forward Pinellas and consultant AECOM, in partnership with Pinellas County, have completed a planning study that is the first step in making that option a reality. This study, which was completed in June, identifies a preferred route for a future shared-use trail that would generally follow Joe’s Creek through the Lealman area in southern Pinellas County. Partially funded by a grant from the Centers for Disease Control and Prevention’s Partnerships to Improve Community Health (PICH) program, the study is part of a continuing effort to increase access to safe walking and bicycling opportunities in traditionally underserved communities.

The study evaluated the area north of 38th Avenue North, northeast of Tyrone Boulevard (US Alt 19), east of Park Street North, south of 54th Avenue North, and west of 34th Street North, as illustrated in the map below. The area suffers from a lack of public investment in sidewalks, bicycle treatments, crosswalks and other forms of multimodal transportation infrastructure, and has high concentrations of minority and low income populations. The lack of a complete network of sidewalks, bicycle facilities, and trails affects lifestyle choices, leads to social isolation and makes it more difficult to travel safely.  Additionally, a significant portion of the study area was recently designated by the Pinellas County Board of County Commissioners as a Community Redevelopment Area (CRA), which is an area that has various physical and economic challenges. Funding to construct this project would be considered after the possible passage of the Penny for Pinellas in November.

“Construction of the Joe’s Creek Greenway Trail will fulfill a longtime vision to improve the services desert that this area faces,” said Matthew Campbell, the town manager of Kenneth City. “The trail will provide an immensely needed recreational resource, ultimately connecting the greater Kenneth City/Lealman community with the Pinellas Trail. The Town of Kenneth City has already earmarked future Penny funding for a connection to the trail that will provide users convenient access to nearby amenities including newly renovated parks, meeting space, and our Police Department.” 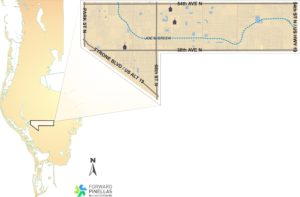 According to the United States Census Bureau, the median household income of $36,564 in the study area is about 24 percent below the countywide average. Certain portions of the study area have more than 20 percent of households without access to a vehicle – more than double the percentage countywide.  In addition, multiple areas in Lealman have comparatively high numbers of people who walk, bike, or take transit to work. These data points support a strong need for additional modes of transportation and increased community connectivity.

The study recommends a preferred trail alignment for future construction, which is shown below. This route was selected due to nearby complementary land uses, environmental assets, potential use of existing public rights-of-way, the connections to existing and planned bicycle/pedestrian facilities, and the ability to connect area residents to various destinations including shopping, workplaces, parks, and schools.

The preferred trail alignment is illustrated in the map below. Traffic signals where the trail would cross at both 66th Street North and 49th Street North are recommended based on traffic volume, speed and the number of lanes to cross. 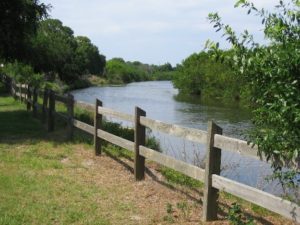 The five-mile, east-west trail would provide a healthy and safe way to travel across the county by connecting residents to the Pinellas Trail, public transportation service, area schools, shopping centers, and other destinations.

“We are really excited to partner with Pinellas County to bring our highly successful trail planning program into the Lealman area,” said Rodney Chatman, planning division manager for Forward Pinellas. “This area has suffered from disinvestment for a number of years, and we are hoping to use this project as a catalyst to positively impact the daily lives of area residents.”

In addition to the trail alignment study, Forward Pinellas recently awarded $50,000 in grant funds to Pinellas County for a Complete Streets project just north of the study area along 54th Avenue North between 34th and 49th Streets, ensuring there are future investments to better address the mobility needs of the community. That project will work with residents to decide how to make transportation better for all users and also boost economic growth in the corridor. 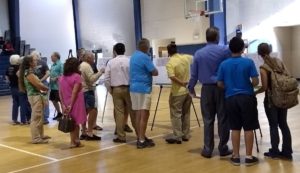 Overall, the public has strongly supported this trail. At an open house to collect community input in May, Lealman residents shared their thoughts and opinions regarding the study and trail alignment options. Many of the attendees voiced strong support for the project and said this was a great idea given that there are currently no trails in the area. A few citizens were concerned about the unintended consequences of constructing a new trail near their properties, and Forward Pinellas is working with Pinellas County on ways to address their concerns.

This study would not have been possible without coordination and cooperation between partner agencies to achieve a common goal to improve the lives of area residents.  Forward Pinellas will continue to work with the various stakeholders, which include the City of St. Petersburg, Pinellas County, Kenneth City, the Florida Department of Transportation, and the Florida Department of Environmental Protection to complete engineering design and identify funding to build the trail.