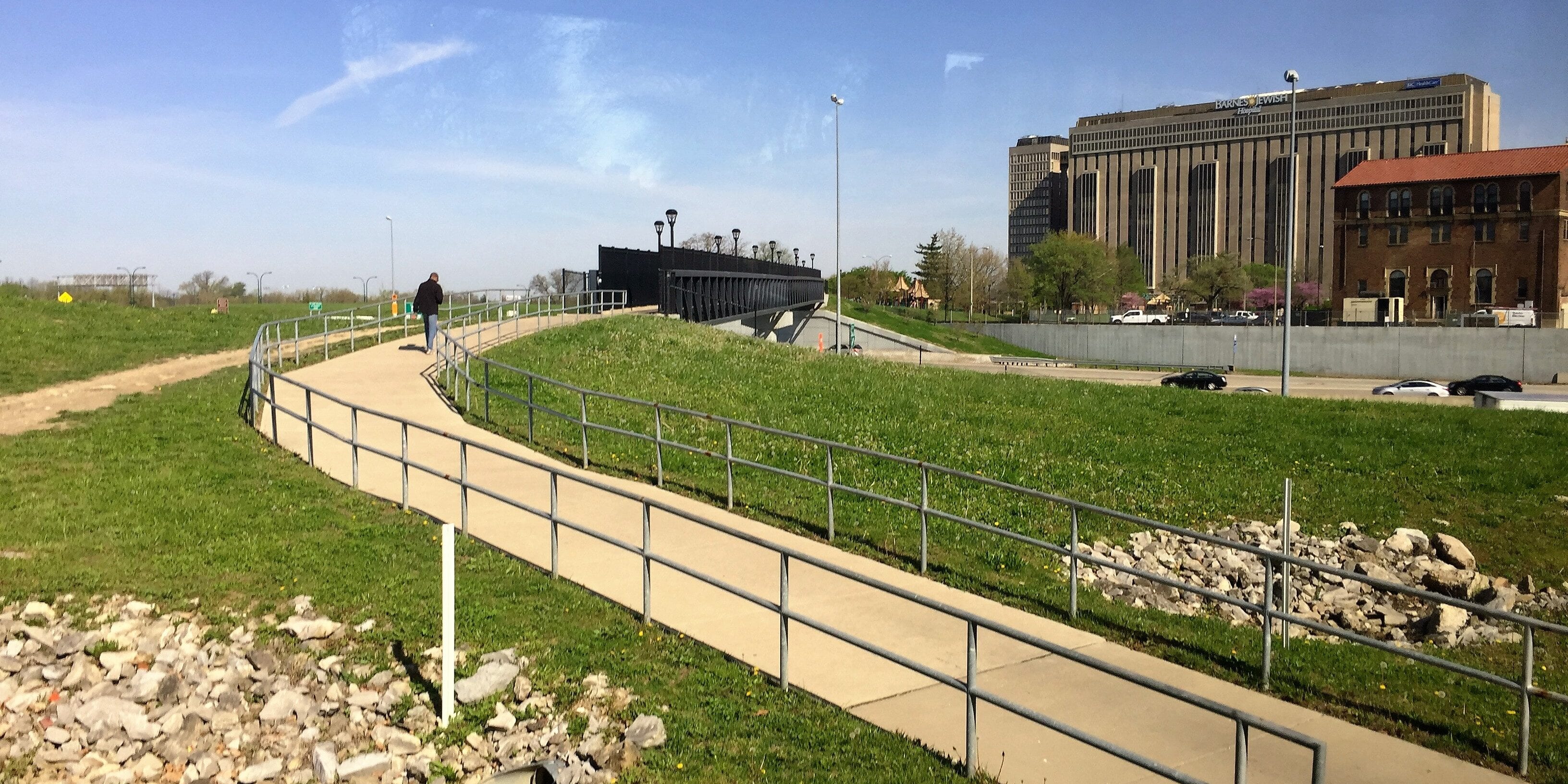 While building transportation projects is a contentious process in Tampa Bay, we are not alone in struggling to engage the community and get projects done. I wrote in my previous post about the Florida Department of Transportation’s peer exchange trip to St. Louis for about 20 local representatives, a trip designed to give us a new perspective on our own transportation issues. What did we learn? What were the takeaways and how could they apply to the Tampa Bay area? 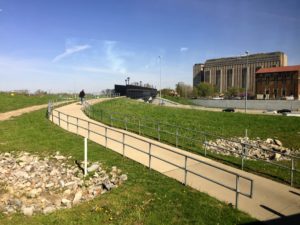 Sidewalk built over I-64 to connect a residential neighborhood with jobs and services.

The visit over 20 hours left little time to get into a deep conversation about project elements and public engagement methods or to get perspectives from the affected neighborhood communities. Still, there were valuable insights. We saw that the process of building I-64 was one of building consensus, following a clear governance structure for roles and responsibilities, and committing the needed investment based on the context of communities along the corridor. The group on the trip will reconvene in the first week of May to compare notes and discuss the lessons learned. That debriefing will help to inform FDOT’s work with the several Community Working Groups being formed as part of Tampa Bay Express reset. In the meantime, here are my impressions from two days of briefings, field visits and dialogue with a range of staff and officials from the Show Me State.

I-64 in the St. Louis area is one of the nation’s oldest interstates, and was built to different standards than today’s highways. The tight curves, weaving and low clearance overpasses were causing safety and congestion problems, and the road was reaching the end of its useful life. As the primary east-west route connecting downtown St. Louis and the Mississippi Riverfront to the suburban areas in St. Louis County, the roadway became a focal point for a mix of residential, commercial, civic, institutional and recreational land use patterns. Like I-275 across the Tampa Bay, I-64 suffered from inadequate design and operations conflicts that caused daily traffic congestion and safety problems.

In the early 1990s, Missouri DOT (MoDOT) attempted to proceed with an interstate reconstruction plan developed in prior decades that met strong opposition from neighborhoods in several of the nearly 100 cities in St. Louis County. The needed fixes to the highway required closing the interstate to travel for a two-year period. As MoDOT Chief Engineer Ed Hassinger told us, “Big regional transportation projects are hard; it is like threading a needle,” to build community consensus and make the engineering work.

Amid civic and business concerns about closing the road for reconstruction, MoDOT and its transit partners at the Bi-State Development Agency (which operates the regional bus network and MetroLink light rail) assured mayors and county executives that the department could gain community support and manage the traffic. The “Cross-County Corridor” study that resulted study looked at I-64 design concepts, including not widening the interstate through the City of St. Louis, as well as light rail alternatives, operations and safety improvements. 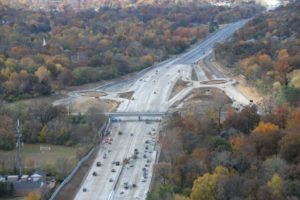 Take Away for Tampa Bay

The issues Tampa Bay faces now and St. Louis faced then are not new. Transportation planning is about finding the right balance for regional mobility and community accessibility, and that debate can be contentious, particularly if people feel like they are not part of the plan. While the context for regional transportation improvements St. Louis is similar to Tampa Bay in some respects, it is different in others. For instance, Missouri has a constitutional provision banning toll roads.

Here are a few of my initial observations from the trip that I’ll bring to the regional conversation:

Here in Tampa Bay, we are starting a new conversation about regional transportation and its role in building community and connecting our distinct places. Our St. Louis experience offers valuable perspectives on how to apply their lessons learned to our own circumstances and culture. The Community Working Groups that FDOT is establishing are the start of that conversation. Please join us in helping us adapt, build and connect our region.