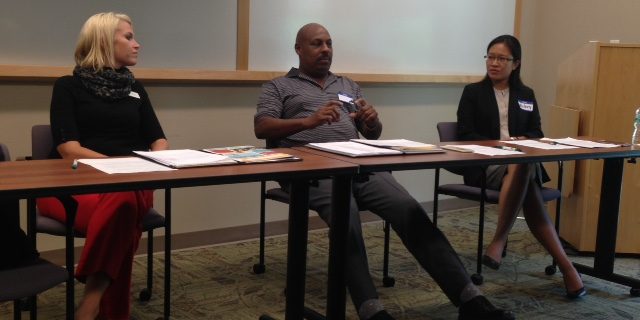 The conditions reflected in these sobering numbers and solutions for alleviating them were the subject of discussion at the Sixth Annual Conference of the Tampa Bay Network to End Hunger on October 21. About 170 people attended the conference at the Patel College of Global Sustainability at the University of South Florida in Tampa. The event featured 12 moderated discussions with panelists focusing on issues and solutions to addressing hunger in their communities. These solutions included meal delivery programs, urban agriculture, and food waste recovery.

Forward Pinellas seeks to ensure that lower income areas within the County where food insecure populations are concentrated have affordable transportation and housing options available. Transportation options include facilities for walking, bicycling and transit service. Multimodal accessibility for these areas is a priority in the planning and scheduling of transportation projects identified in the Forward Pinellas Long Range Transportation Plan.

In addition, as the planning agency for the Pinellas County Transportation Disadvantaged Program, Forward Pinellas works with social service agencies and transportation providers to address barriers affecting the mobility of low income and physically and mentally impaired citizens.

“Food insecurity has serious health consequences,” said keynote speaker Craig Gunderson, a professor of agricultural strategy at the University of Illinois and a member of the Feeding America Technical Advisory Group. 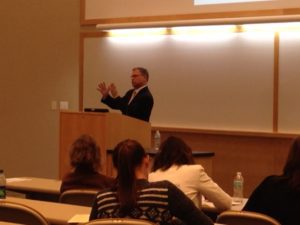 Keynote speaker Craig Gunderson, professor of agricultural strategy at the University of Illinois, explains the implications of food insecurity in the U.S.

For children, Gunderson explained that food insecurity leads to more hospitalization, higher risk for chronic conditions such as anemia and asthma, and more instances of oral health problems. He also discussed the economic impacts of hunger, citing a 2015 Canadian Medical Association study reporting a 121 percent increase in the cost of healthcare for households with severe food insecurity.

One of the panel forums took on the subject of senior hunger.

“We’re living longer but haven’t solved the problems of aging,” Meals on Wheels of Tampa Director Stephen King said. He identified transportation as one such problem.

“Many of our seniors can’t leave their house so we have to bring the food to them. This is one way to effectively provide food security for seniors,” he continued.

Meals on Wheels of Tampa delivers to 700 homes daily and has no waiting list. But Patty Coleman, Nutrition Operations Manager for Neighborly Care Network in Clearwater talked about the difficulty she faces in reaching home bound seniors. Her organization isn’t able to meet the demand for their services due to limited funding.

“We need volunteers to deliver fresh foods,” she added.

Mary Jo McKay oversees Hillsborough County’s nutrition, adult day care and senior center programs.  She pointed out that a lack of public awareness about senior services in her county is a significant challenge.

“Many people in our community were unaware that the Sunshine Line would take them to food banks,” she said. “Sometimes I go door to door to get the word out.” 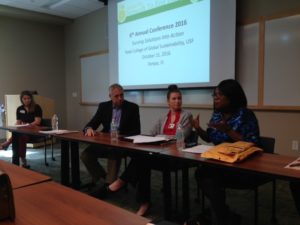 “There is a stigma attached with asking for help,” said Shannon Fernandez, program manager for the Area Agency on Aging of Pasco-Pinellas. She added that most people eligible for the Supplemental Nutrition Assistance Program (SNAP) do not participate in it for that reason.

One of the central themes of the conference was the need to promote sustainable urban agriculture as a way to provide heathy food options to people who couldn’t otherwise afford them. This was articulated in the sustainable urban agriculture panel discussion featuring experts in the fields of permaculture and local farming. Carol Smith, Executive Director of the Local Food Project in St. Petersburg, spoke about some of the issues confronting the growth of sustainable food production.

“We need a comprehensive plan for urban agriculture,” she said. Smith added that local government policy changes are needed to support it.

Travis Morehead, chairman of the Pasco County Food Policy Advisory Council (FPAC), spoke about his “Grand Garden Project” where he and his family maintain an organic vegetable and herb garden in New Port Richey. Volunteers who work in the garden share the vegetables and herbs it produces.

“The missing piece in community gardens is that one person runs it and has to do all the work,” he said. “This is why most of them fail. We have different volunteers working every day to share the responsibility of maintaining it.”

Morehead also works with local governments in Pasco County through the FPAC to make it easier for people to set up farmers markets and sustainable gardens like his. According to the National Resources Defense Council, 40 percent of the food produced in the U.S. each year ends up in landfills where it makes up the largest portion of municipal solid waste. This level of food waste makes the hunger problem even harder to accept in in a country that has an ample food supply. In 2015, the U.S. Environmental Protection Agency established the goal of cutting the nation’s food loss in half by 2030. 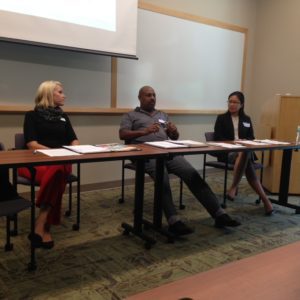 The subject of food recovery was addressed in a panelist discussion with Transportation Director Darin Dumpson of Religious Community Services in Clearwater and Agency Services Manager Rhonda Gindlesperger of Feed Tampa Bay in Tampa.

“It is cheaper to give food away than it is to throw it in dumpsters,” Dumpson said. He manages a small fleet that delivers food to local pantries, homeless shelters, domestic violence safe houses, soup kitchens and elderly and disabled housing complexes in Pinellas County. The primary beneficiaries of the food they provide are children ages 5 to 13.

Religious Community Services is part of Feeding Tampa Bay’s network of agencies in the region that deliver food from grocery stores, retailers, shippers, packers and growers to local food banks and pantries.

“It’s a win-win situation,” said Grindlesperger, describing the arrangement they have with local grocers to pick up food that would otherwise be discarded. She added that all the major grocers in the area are working with them to fight hunger in Tampa Bay. “The lack of public awareness about hunger is a big issue,” said Grindlesperger regarding food waste. While she considers the effort to engage the region’s grocers in the effort to fight hunger a successful one, she acknowledged that it has limited impact on reducing the accumulation of food waste in landfills when compared to what is generated by consumers and restaurants.