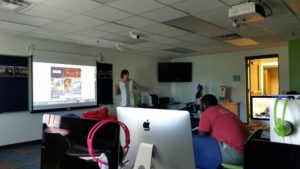 It’s Saturday morning, and Michael Lyman is teaching a class on creating graphic novels. He gestures at a screen filled with giant comic-book panels, pointing to one showing soldiers marching across a bleak landscape.

The setting is the Digital Den, the newest addition to the City of Seminole Recreation Center. In July, a room that once held ping-pong and pool tables was refitted with 10 Apple computers. The computers were loaded with programs for digital sketching, sculpting, photo and video editing, 2D and 3D animation, comic book creation, game design, and even programming mobile apps — covering any conceivable kind of digital art that might interest the young, artistically inclined residents of Seminole.

The Digital Den offers more than a fun extracurricular activity: it gives the young people of Seminole skills they can eventually use in the workforce. Along with Pinellas County Economic Development, Forward Pinellas has identified these creative, technology-driven jobs as “target industries” that are especially desirable for our community to attract. They pay well, have a low environmental impact, and fit well into our growing urban centers.

The program was conceived by Mark Ely, the city’s community development director.

“Kids today swim in the digital ocean,” he says, adding that many adolescents lose interest in sports or other traditional recreational activities. “This fills a hole in our recreation program.” 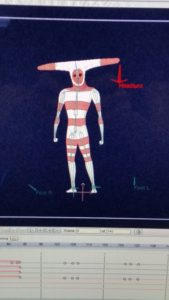 He describes it as the first digital arts recreational program of its breadth in Florida, and possibly the nation. The project is a labor of love for Ely, who not only spent two years researching software and equipment, but actually purchased it and donated it to the city.

City staff are still working to market the program along with tweaking the class offerings and available hours, and for the moment, participants are required to sign up at the recreation center in person.

Lyman, who has been teaching drawing classes for 15 years, hopes news of the program will spread. He lauds it as an outlet for artistically talented students, allowing them to tell their stories.

“They learn for fun, but these are skills employers look for,” he says. “They can take what they learn here and go anywhere.”

The students in today’s class have stories to tell. A 13-year-old girl, Hannah, has already written a script for her graphic novel. With some coaxing, she describes a science fiction story where two cyborg armies fight over how to save an environmentally-devastated Earth; one wants to do so by destroying the human race.

While the Digital Den was originally targeted for young people up to age 17, it has attracted participants of all ages. The oldest student in the graphic novel class is 28. An evening class in digital photography is made up entirely of adults, and taught by retirees Frank and Brenda Lamica, who have been teaching photo editing for 12 years.

“I can’t get over this facility,” Frank Lamica says. “It would be nice if Tampa or St. Petersburg had something like this.” 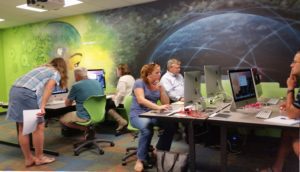 Lyman says the center has equipment established design schools would envy, and Ely says the city has fielded interest from St. Petersburg College and the St. Petersburg/Clearwater Film Commission. Even Apple has offered to provide free classes.

It may be the only one of its kind today, but the Digital Den is a preview of the future — at least for communities that want to remain economically competitive. In its 2015 report Arts & the Workforce, the non-profit advocacy organization Americans for the Arts cites a BBC forecast that the world will have one trillion connected devices by 2050, encompassing everything from refrigerators to wallets. Artists and creatives will be the ones designing the human interfaces for these new technologies and will be needed like never before.

Florida could be well-positioned to take advantage of that growth; according to the organization’s 2015 Creative Industries Report, nearly two percent of all jobs in Florida are related to art, design, or other creative pursuits, ranking it 14th among states. In Pinellas County, the percentage is 2.7, and in St. Petersburg (the only city in Pinellas for which statistics were provided), it’s an impressive 5.4 percent.

“We need to tie these arts programs into income opportunities,” Lyman says. “Young people are going to go where the jobs are.”

If Mark Ely and the City of Seminole have anything to say about it, that future is already being dreamed up, one cyborg warrior at a time.