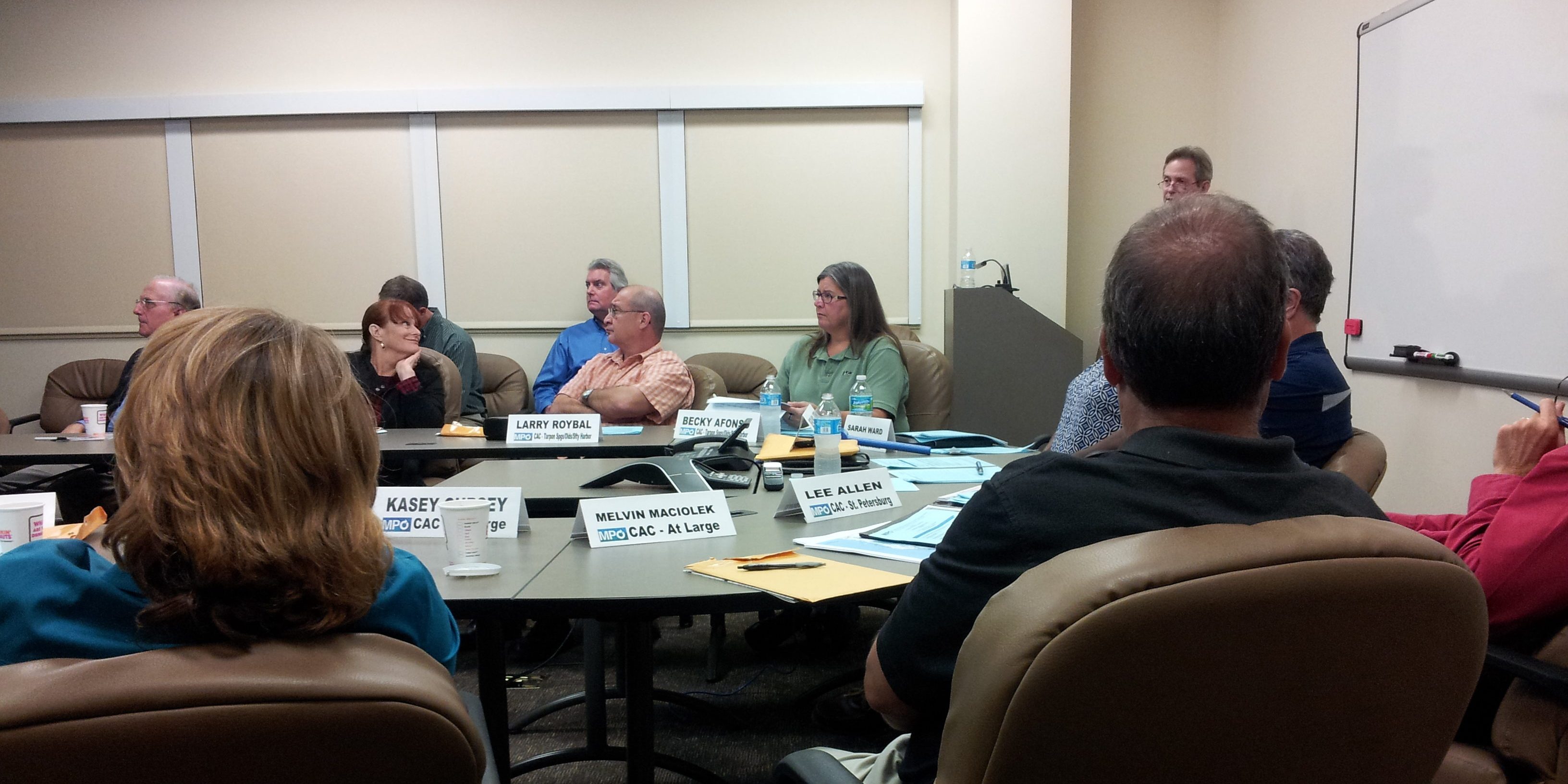 Proposed amendment of the TIP FPN# 4025201 adds $5,000 in FY 2015/16 and $200,000 in FY 2016/17 for the design phase of a traffic operations and safety project on 3rd Street North and 4th Street North from 5th Avenue South to 5th Avenue North in the City of St. Petersburg. The proposed improvements include the installation of intersection bulb-outs, sidewalk ramps, signal modifications and a high emphasis crosswalk. The funding sources for this project are FDOT’s Highway Safety Program (HSP) and in-house product support (DIH) funds. This project is included in the new TIP that takes effect on July 1. But since it is scheduled to begin between July and September, 2016, the project must be added to the current year TIP. The current year TIP remains in effect until October 1, 2016.

Proposed amendment of the TIP FPN# 4343041 is for a Bus and Bus Facilities Program Section 5339 Grant. The Pinellas Suncoast Transit Authority (PSTA) has received an FY 2015/16 allocation of $2,773,452 in Federal Transit Administration (FTA) Section 5339 grant funds.  The grant funds provide capital funding to replace, rehabilitate and purchase buses and/or related equipment and facilities.  The TIP amendment is needed to satisfy plan consistency requirements and to receive federal authorization of the funds.  The funding source is the FTA Section 5339, Bus and Bus Facilities Program.

The TIP is required by Federal and State Law and contains the transportation work programs of the County’s local governments, including the airports and the Port of St. Petersburg, as well as the Florida Department of Transportation (FDOT) District 7 and the Pinellas Suncoast Transit Authority. The STP Project Priority List is utilized to determine the allocation of Federal funding for this program as authorized under the 2015 Fixing America’s Surface Transportation (FAST) Act.

The Public Participation Plan (PPP) is proposed for amendment to reflect changes to the Citizens Advisory Committee bylaws that were approved on June 8, 2016. The proposed changes concern the process for appointing Citizens Advisory Committee (CAC) members. New language associated with the changes is shown below. There is a public comment period on the proposed amendment of the PPP that extends to July 11, 2016. Citizens may provide comments during this time and during the public hearing on the item at the July 13 Board meeting.

Anyone interested in serving on the CAC must complete an MPO Advisory Committee Member application and attend at least one CAC meeting in order to be considered for appointment. This includes individuals recommended by MPO Board members. Elected officials are not eligible to serve on the Committee. Considerations in the appointment of CAC members are listed below in order of priority.

The July 13 public hearing will be held in the Pinellas County Board Assembly Room, 5th Floor, Pinellas County Courthouse, 315 Court Street, Clearwater, Florida, beginning at 1:00 p.m. The meeting agenda is available at: https://forwardpinellas.org/wp-content/uploads/2016/07/forward_pinellas_agenda.pdf. Following a brief staff presentation describing the proposed amendment, public comment will be received. The public hearing is being held pursuant to Chapters 120 and 339.175 of the Florida Statutes. Further information may be obtained by contacting the Forward Pinellas via email or (727) 464-8250.

Public participation is solicited without regard to race, color, national origin, age, sex, religion, disability, or family status. Persons who require special accommodations under the Americans with Disabilities Act or persons who require translation services (free of charge) should contact the Office of Human Rights, 400 South Fort Harrison Avenue, Suite 300, Clearwater, Florida 33756; [(727) 464-4062 (V/TDD)] at least seven days prior to the meeting.