Lessons for our transportation future from Indy’s past and present

Understanding the transportation challenges that other communities have faced and how they have overcome them is essential to developing any project or plan for our region. With that in mind, on November 7, 2018, Forward Pinellas and Pinellas 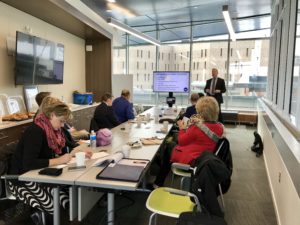 Suncoast Transit Authority (PSTA) representatives and staff set out on a peer exchange trip to Indianapolis, Indiana. Participants met with staff, elected officials and community leaders. In two and a half days, the participants learned from Indianapolis’s transportation planning and development efforts, specifically the Indy Connect and the referendum-supported Marion County Transit Plan, as well as the Indianapolis Cultural Trail. Participants returned from the trip with useful takeaways for planning and development efforts in Pinellas County and the Tampa Bay region.

Taking a Look Back to Move Forward

Founded in 1820, Indianapolis was established as a grid pattern with four diagonal avenues stretching outward from the Governor’s Circle. By 1850, eight rail lines ran through the city.  The introduction of the automobile encouraged the construction of a major network of highways, making Indianapolis a major transportation hub of the region, known to many as “The Crossroads of America.” Keeping Indy on a trajectory of growth, connectivity, and productivity is important to people like Drew Klacik, a senior policy analyst with the Public Policy Institute of Indiana University. During the peer exchange, he shed light to Pinellas participants on the struggles of their region.

While Kiplinger and Forbes call out Indianapolis as a “Top 10 Place to Start a Business” and “Top 10 Place for Young Professionals,” Indy struggles to grow and retain a talented workforce, as wages are low and growing slowly. The poverty rate is high and climbing. Klacik emphasized that it is important to understand how these challenges are inter-related in order to make better planning decisions moving forward, while also comparing Indianapolis data to other “Amazon Peers” primarily located in the Midwest. With a high migration of people moving out of state, Indianapolis is focusing on strategies to educate and raise wages for workers who lack formal college education and others who are under-employed. Connecting residents to job opportunities and education is essential to their region remaining viable economically and retaining talent. 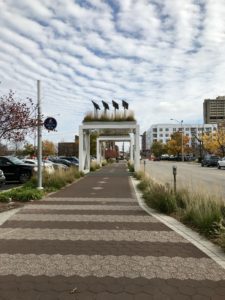 One of Indy’s strongest assets, which helps to improve its economy and create a sense of community for residents, is the eight-mile Cultural Trail running through downtown Indianapolis. It connects residents with cultural districts, art, sports and entertainment throughout the city, along with a regional trail network running along a former railroad line.

“The trail has been an economic driver,” said Cynthia Bowen, president of the American Planning Association and a local planning consultant. For Indy, it has been a vital form of place-making, near which businesses and residents have opted to locate. Between 2008 and 2014, property values within 500 feet of the Cultural Trail have increased by 148%.  A walking tour on the trail featured public art installations and extensive private sector development investments. Participants learned firsthand that shared electric scooters, cars and bikes contribute to making it easier to get around the city.

As a result of a referendum to improve transit in 2016, three Bus Rapid Transit lines have been funded as part of the overall transit service expansion plan, and the first of them is under construction in Indy. Following the trail tour, participants set out on an IndyGo electric bus to see areas that will be served by the future Red Line Route. Participants were able to see construction activities, connectivity projects, and redevelopment along the way. The Red Line provides the greatest access to jobs from low income neighborhoods compared to other alternatives.

With Indy in the midst of expanding its transit service, developing Bus Rapid Transit lines and guiding higher-density land uses around its Cultural Trail, Pinellas can gain knowledge from Indy’s transportation planning initiatives to develop a more accessible and connected region that supports economic opportunity and growth. Similarly, Pinellas can learn from Indy’s focus on attracting and retaining talent, as this is also important to Pinellas County and the entire Tampa Bay region.

It’s imperative to note that Indy’s MPO has focused on becoming a regional convener. Partnerships beyond transportation were essential to developing the agency’s strategic plan and were encouraged from the beginning of the process. The MPO recognized that becoming an independent regional organization would allow it to operate more efficiently and become a hub of resources and information. Bringing together regional partners to discuss issues and identify solutions is a major priority for the MPO. 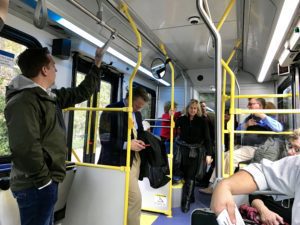 Mark Fisher, Chief Policy Officer for the Indy Chamber, provided an overview of the political efforts to win support for a transit funding program in the counties of the central Indiana region. He provided his keys to success on developing a successful transit plan with a strong coalition of supporters. He expressed the need to constantly test and refine the plan, as well as the importance of messaging to the audience in the right way, focusing on trust, a common goal, authenticity, transparency and accountability. Too many messages can be confusing, so it’s important to establish a few key reasons for public support.

In November of 2016, Marion County residents had the option to vote on an income tax increase of 25 cents for every $100 of income to pay for improving public transit.  It was approved by referendum, and the Council enacted the tax. The messaging was simple: “If approved, the Marion County Transit Plan will create a connected frequent network of buses and rapid transit lines; shorten wait times and increase morning, evening and weekend hours; and expand the Red Line and implement the Blue and Purple rapid transit lines.” Indy Connect, which is Central Indiana’s Transit Initiative, was the biggest public engagement process that central Indiana had ever undertaken. And it worked. People understood the intent of the tax and how it would impact their job opportunities.

By focusing on messaging and public engagement, the outcome for Indianapolis was to create better transit options for their residents. They continue to strive for ways to connect people and places. Likewise, Pinellas could learn from Indy’s efforts and focus on educating the public to achieve the best transportation options for residents and the economy.